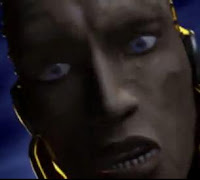 So, the other thing that happened over the weekend was that I finally finished Baldur's Gate 2: Shadows of Amn after, what, 7-8 years of playing on and off? And...it was a huge disappointment. I guess that's partly my fault for having the WeiDU Big World mod installed, so the game just runs straight from the main story to the expansion pack. Still, I was hoping that after that long there'd be a nice payoff for destroying Irenicus once and for all, but nothing, just a little speech then I was off on the next quest.

One quick YouTube search later, it turns out there should have been an ending video, but it must have been removed from the Big World mod for continuity, or something. I guess I should think of it as an ongoing story rather than an ending, but still. I love the game and all, but after that amount of time I expected, no - longed for something more. So, going by how long it took me to finish that part, I'll let you know in 2015 whether the ending to the final Throne of Bhaal storyline was worth it!
Posted by Binkbenc at 14:29