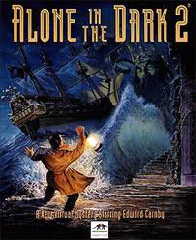 So, it's been a long time again since the last update. I actually finished Les Manley a day or two after the last post, but haven't been back to update. It was (almost) exactly the same as I remembered it all the way through. The only difference was the final bad guy. For some reason I remembered a different face behind the mask. Weird. I must be confusing him with a different game bad guy. Anyway, it was all good fun. It'll be interesting to compare it to the Leisure Suit Larry games when I get to them in a thousand years time.

A while back I decided to add my playstation games to the back list, and next up was the first of those - Uncharted 2. I completed the first Uncharted game years ago when I first got my PS3 and enjoyed it a lot. Even Kate seemed to enjoy it a little, back when I used to be able to play games in the open without fear of a telling off :) It was also back in the days before they had trophies, I think it might have been one of the first games to have trophy support bolted onto it. Most annoyingly they didn't count any of the awards you already had toward the new trophies and, typically, I finished the game just before trophy support was added. Was I going to go back and play it again just for the trophies? Hell no. Although I have to admit I was tempted when I saw that there was some kind of special reward unlocked in the second game when you had trophies from the first... But no, I couldn't quite be bothered. Anyway, what's the game like? It's good. Plays pretty much the same as the first game as far as I can remember - Tomb Raider with better guns. The first game descended into a boring shooter toward the end, with zombies no less. This one hasn't done that yet, it's still all very cinematic with lots of exploration and cut scenes. To be honest, it does feel a little bit hand-hold heavy - you never really have to look for where to go next. I guess that's what they intended to keep the story moving along at pace. That's no bad thing, but I think they erred a little too much on the cautious side, and a little bit of head scratching would have benefited the game. I'm not sure how far along I am, maybe two-thirds of the way? I'm looking forward to finishing it, though. It's a very enjoyable romp.

In other news, I've decided to give up on The Bard's Tale. It got to the point where I was preferring to work through lunch rather than go back to it, and that's just terrible! So that means I'm going to skip out on the third game as well. That's actually the one that I used to own, so I was curious to go back to it, but I know it's basically exactly the same game as the second and I'm not that much of a glutton for punishment. Next up on the sequel side, then, is Alone in the Dark 2. It should be a nice change of pace. I completed it before, many years ago, so I'm hoping I'll be able to zip through it.

Oh, and in the last piece of news for this long post, I've finally finished adding all of my random games to the database, and the total count stands at 2950! That might take me a little while to get through. Once I've worked out how many of those I've completed,  I'll add a count to the page to show how far I've still got to go on this silly quest of mine.