Rocket Out of Range 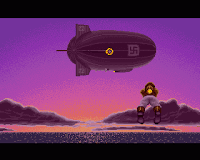 I tried, I really did, but technology was my enemy. The game runs way too fast in Dosbox, and slowing it down seems to cause some glitches. So I'm giving up on it for now, but it looked like there was a good game hidden in there (and reviews of the Amiga version seem to bear this out). It's a really interesting mix of genres - in the first part of the game you have to move your secret agents around a map of the world infiltrating countries and trying to find Nazi bases. Unfortunately, this is one of the glitchiest bits - I had to slow the game right down (otherwise a timer ran out and the Nazis automatically won) and then in order to move the location of an agent I had to hammer the keys until I managed to get the exact millisecond difference between selecting an option and moving my agent. This usually took a couple of minutes, and was not much fun. Once your agents find a base, you then fly your hero over to it (by inputting the correct amount of fuel to get to that country from your current location - information which could only be found in the manual. Great (but annoyingly regular) copy protection. Depending on the base type, you then get different action sequences - shooting down some Me109s, avoiding ack-ack, taking out the guns and landing on a zeppelin, etc. These are short and good fun (though the hit detection seemed a bit random to me - could have been because of dosbox) and keep the story zipping along. You then get your agents to stir up the population in each country, and this slows down the Nazis and brings you more fuel for your rocket pack (forgot to mention that you have a limited amount of it at the start, and so need to be careful where you travel to). There's also a bit of a love story going on with the chief scientist's feisty daughter - you have to do a bit of verbal jousting with her whenever you rescue her to get her back on your side.

As I say, the main game seems pretty fun, but the emulation side is just too frustrating to carry on with. Next up is...Oooooohhhh...Mars Saga, otherwise known as...Mines of Titan! That brings back memories. George used to have it at school. I remember bits of it - various training centres to up your stats, gambling at keno, recruiting characters, traveling around titan, and errr getting killed a lot. I don't remember how far we ever actually got in the game itself, but yeah, very fond memoried. Very much looking forward to this.
Posted by Binkbenc at 14:50