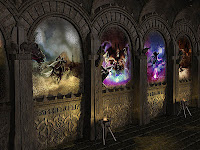 Had a bit of time on a day off today and I finally, FINALLY finished Beyond Divinity. It was a heck of a grind and nowhere near as much fun as the first game, and I'm really, really glad it's over. The ending continued the bad design decisions. The actual surprise at the end was good, but they then went in for a little too much exposition. They essentially retold the entire game - admittedly I had forgotten some of it - in narrated cutscenes without really adding anything new. I don't know if it was meant to be an 'aha!' moment once you knew the final reveal, but it didn't really add anything. It's a shame, I love an epic RPG as much as the next guy, probably a bit more, but this just didn't do it for me. Ah well.

Next up on the series list are Epic and its follow up Inferno. Space flight games that I don't really know much about. I think they're more arcadey than, say,  the Elite-style Privateer, but we'll see.
Posted by Binkbenc at 17:14