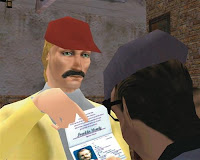 I plumped for Gabriel Knight, and I've given it a quick couple of sessions. It still feels very much like the first two games even though the technologies are completely different, which is a good thing. I wonder if Tim Curry's voice over helps to bind things together in that regard. It's based on the same (now debunked) mythology as The DaVinci Code, and I'm a bit of a sucker for those "enhanced archaeology" stories - The kinds of things that Indiana Jones/Lara Croft/the Broken Sword games focus on, too. In fact, Indy and Broken Sword have both covered this tale before from a different standpoint, too. So far, Gabriel Knight is pretty firmly following the Holy Blood, Holy Grail tale, and is set in Rennes-le-Chateau. I have no idea how the story is going to go, so we may see some crazy mythical situations popping up later. The game is split into time chunks, with time moving forwards once certain tasks have been completed. Because there's no actual timer, it means you have plenty of time to wander about soaking in the ambience and chatting to people, which is nice and keeps it feeling like an adventure game. As I say, I've only been playing for a little while, so I've only really done one puzzle - the infamous cat-hair moustache. I actually didn't think it was that bad, it's pretty well signposted and if you get Gabriel to look and think about everything then he'll pretty much tell you what you need to do. I've seen a lot of stick being given to the fact he makes a moustache when the guy he's imitating doesn't even have a moustache (until he draws one on the passport), but I think the reason given in-game is good. He knows he looks nothing like the guy, so he needs a big distraction - the moustache - which will draw people's eyes so they won't look at the rest of the face too closely. Makes sense to me.

Anyway, enough waffle. I'm enjoying it so far and I'm looking forward to playing more. I'm also playing another little game, Velocity, on the PS3 in the odd morning where I get up earlier than the kids and have a spare few minutes to play. It's quite fun, so I might write more when I've finished it.
Posted by Binkbenc at 18:12