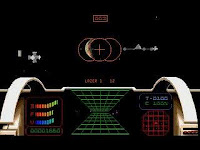 No updates recently because work has consumed my life. I switched over to a new team a couple of weeks ago and I've been up to my eyeballs trying to get up to speed with the new stuff while still working through all my old stuff. No sign of it letting up anytime soon, but I thought it'd been too long without an update.

Uplink - I've only had a quick blast, started off very interesting, you play a hacker and have to take on various missions to earn money in order to upgrade your kit (software and hardware) so you can take on harder and more lucrative missions. It all sounds very RPG-like, and I guess it is in a way, but I'm finding it all a bit samey. I normally don't mind a grind, but I'm not getting a good enough sense of progression here, and there's no goal to aim for. I'm increasing my hacker rank, but I'm not sure what that does for me other than open up more missions, and those missions are all just randomly generated "steal X document" or "change X bank account" and so on. I dunno, maybe there is a story there and I'm just not seeing it yet. I don't feel like I've given it long enough yet, so I'll keep playing, but I hope something happens soon...the game must have an ending, mustn't it?

Epic - I've started the first mission a few times but not managed to get anywhere in it yet. There's a great cinematic intro and backstory for the game, all feels very Battlestar Galactica, so I'd love to make some headway in it and see what happens. In essence, the sun's about to explode so the human race has to evacuate earth and fly to another galaxy where a suitable new planet has been located. The only way to get there, though, is to fly through the territory of an enemy nation, which is seen as an act of war. That's cutting it a bit short, but you get the gist. So, you're part of this huge armada of ships, and it's your job as a fighter pilot to protect the convoy and lear a path to the new planet. Your first mission has you clearing a path through a mine belt and then flying down to a planet to destroy the tracking station there. So far so good. You launch your ship and find yourself in a huge mass of other ships, presumably the armada. You orient yourself on the waypoint marker on your HUD and jam your finger on the thrusters...only to find the waypoint marker disappears. You fly around for a bit and orient yourself on the marker again, only to find the same thing happening. What gives? I tried this mission quite a few times, flying around trying to find where I was supposed to go but not getting anywhere. In desperation I looked on YouTube and found a playthrough video there. Guess what...that armada you start in? Turns out it's actually the mine field you're supposed to be destroying! That's why the waypoint marker kept disappearing, because you're already at the place you're supposed to be. I couldn't believe it, nothing anywhere in the manual or mission description hinted at that. And it's not like the mines all look the same (or at all like mines), they're all completely different shapes and sizes, that's why I assumed they were the ships of the armada. Anyway, I haven't had time to go back to the game and try the first mission again yet, so I'll add another update when I do.

Final thing, although I haven't had time to play any games I still seem to have found time to buy some more. Damned GOG sales. The Steam summer sale should be starting soon, too, and I doubt I'll be able to resist its thrifty charms. I'm an idiot.
Posted by Binkbenc at 17:22