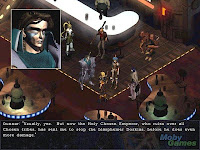 It's finally done. I won't write too much about it here, as I've already done a couple of posts on poor old Septerra, but I can't tell you how glad I am to have finally beaten it. It definitely did outstay it's welcome a bit. By the end there was just way too much backtracking through samey dungeons, and every one was full of exactly the same kinds of switch maze...walk to one end of the dungeon to flick a switch that opens a door at the other end of the dungeon, so walk all the way over there to find another switch that opens another door back at the other end of the dungeon...repeat ad nauseam. They did a few things to try and lighten the tone - some combat initialisation sequences were quite fun and the backgrounds were always quite nice, but the mazes were just...ugh. The story and setting were good, and they did just about carry the weight of the game, it's just a shame the gameplay couldn't have had the same level of uniqueness. The ending when it came was quite quick and a little odd. The developers were obviously banking on the game being a success and they'd planned for a sequel, but that unfortunately wasn't the case. So in the end, the game is left with a bit of an enigmatic conclusion...things that happen in the final scene aren't explained, and the final prophecy isn't at all what you expect, but unfortunately isn't at all explored either. I won't spoil what it was, as I'm sure you're all going to rush out and buy the game right now...but it was a bit of an anticlimax. Ho hum.

Next up on the game pile is...ooh, the SSI Buck Rogers games added to the series list - looking forward to those, but the next single game is...Raiden. It's a top down shooter, which'll be an interesting change of pace. Unfortunately I've also just read a review saying it's "one of the worst shooters I have ever played". Should be fun.
Posted by Binkbenc at 21:54