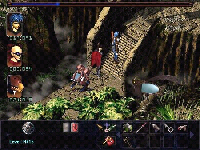 I'm trying to do a post a week, but I really don't have much to report here. My folks have been down on holiday, so off a few days this week seeing them and the rest of the time in the office has been manic. Still, the point of this blog is the games, so on to them! I've only had time for a couple of quick sessions of Septerra, but I've made a little progress. One thing I can't fault the game on is the story - there are lots of twists and turns (maybe a few too many) with characters following their own motivations and affecting the story. I am getting a tiny bit of quest fatigue, though. There are too many instance of "Aha, well done for bringing me the the great Ankh of X, now if only I had the great Seal of Y we'd be able to use it. The great Seal of Y, you say? Oh, it's just a little trinket, to make it you'll need to locate the two parts of the supreme Fishing Rod of P and combine them with the Tricorn of Q, which can only be done at midnight in the forest of A, to enter which, you'll need the Key of B." And so it goes on. I don't mind that too much, as it generally moves the story along, the biggest problem is that it involves interminable back-tracking.

A key element of good game design, as far as I'm concerned, is to keep the game moving and not bore the player. If I've just fought through a massively long dungeon filled with evil (EVIL) switch mazes, and I've just killed Eric B. Badguy, then whatever you do, don't make me trek back through the whole dungeon (doing the switches in reverse...again) just to get back to the world map. That is not, never has been, and never will be fun. It's incredibly tedious, slows everything down, and bores the heck out of me. It's not really even worth it for the grind at this point, as I feel like all of my characters are at a good enough level now (they've all learned all of their abilities, so more XP is just a case of a few more hit points). So, that part of the game I'm finding hard. In general, though, I'm still enjoying the game, and I think that is mostly due to the story and the characters. It is starting to feel like it's outstaying its welcome, though, so hopefully the story will start to wind up soon. Oh, and I also read another review of the game where the reviewer commented on the fact that he also didn't find the map button until half-way through the game, so it wasn't just me being dumb. Ho hum. Maybe next week's post will be more exciting.