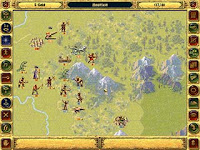 I meant to try and get a post in last week, but didn't quite get around to it. Suffice to say that nothing much has changed since then. I'm now onto the fourth island in Fantasy General and still enjoying it greatly, but I've discovered that there aren't only four islands, there are six, so I've still got two more to go. I have to say that even though I'm enjoying it, that discovery did fill me with dread a little. It just feels like it's taking a long time for a game that I feel like I've mastered (the basics of) now. There are more units to unlock, but they're all just incremental updates of previous units. I've seen all the mechanics that the game has to throw at me (as far as I know), so all the computer can do now is make larger maps with more, and more difficult, enemies on it. It means every level is just a longer war of attrition rather than a new challenge to be discovered. As I said at the beginning, I'm definitely still enjoying it, so it's definitely doing something right, but I'm also definitely feeling like I want the game to be over soon. If this was the last island that would have felt about right...another two to go is going to be a bit of a grind.

In other news, I'm also playing through a few Megadrive games on an emulator on my phone. The phone has a proper joypad, so it's not as bad as all that fiddly on-screen nonsense (it does still give me terrible hand cramp after a while, though!). Anyway, I sneak in a quick go every now and then in the evenings when Kate's on the phone to her mum. I recently finished Aero Blasters (a scrolling shoot-em-up), and I'm currently working my way through Castlevania Bloodlines (otherwise known as Akumajo Dracula, alphabetical-order fans). I think I'll add these to the list as and when I finish them rather than going through and putting them all up now (and making the list another thousand games long!). GoG had a couple of terribly tempting sales recently, too, so the still-to-play pile has been increasing at a worrying disproportionate rate to the games I've finished. Surely there'll come a day soon when GoG doesn't have anything more to offer me?
Posted by Binkbenc at 15:38