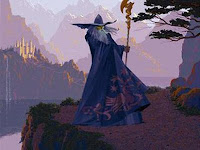 Well, with a mixture of satisfaction and disappointment, Fantasy General is finally over. It was a great, and very absorbing game, and that final battle was blinking hard...The only thing wrong with it was that I didn't realise it was the final battle. Turns out I didn't get to fight Mr. Big Badguy. I destroyed his lieutenant in an epic battle, stormed his throne room, and was greeted with a text box. A well-written, but painfully small text box. I was all set up to make this the first game that I actually took my own screenshot of the final screen to put up on the blog...but I wasn't expecting that little text box to be the final screen, so I didn't capture it. After every single island so far I'd been reward with a graphic of my warlock bestride the conquered continent...but for the end of the game I get a text box. I'm still stunned by it now.

...Okay, I take it all back. One YouTube search later reveals there is a short ending animation that is missing from the dodgy Underdogs copy that I have. That'll learn me for dealing with shadily downloaded goods. I could only find a German video, but it looks like it does the job of wrapping things up (even though you still don't actually get to fight the bad guy. Anyway, the best news is still that it's finally finished, and that it was a great game. On to the next game, and let's hope it's a shorter one!

And the next game up on the randometer is...Survival: The Ultimate Challenge! Oh dear, this doesn't look like a short one at all. From the description it's a kind of cross between an RTS and a hardcore survival sim. Hmmm...mixed feelings, but on we go. I'll also try and make a bit more progress in I-War and get that expansion pack polished off.
Posted by Binkbenc at 11:51