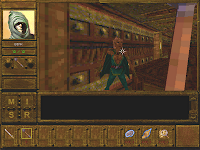 Not much time for anything at the mo', so just a quick update. I did finish the mission pack for Independence War, so I'm moving on to I-War 2: Edge of Chaos on the series list. Not much to say about the Defiance mission pack - it was always going to be more of the same, I guess, but it really did feel like just more of the same, and I really didn't feel like it. It told the other side of the main war in the first game, but it ultimately wasn't that interesting. There were a couple of missions where things were done a bit differently, e.g where you had to be more stealthy...but stealthy in a space game isn't that great. It essentially boiled down to sitting 30 kilometers away from my target with all my ship's systems powered down watching a few blips on my radar and waiting for them to disappear. Not fun. Especially not when you move slightly and immediately fail the mission. Anyway, the sequel, by all accounts, is a completely different beast. It's more like, say, Privateer compared to Wing Commander. Less of a mission-based campaign, and more of work-your-way-up career. I'm looking forward to the change of emphasis and pace (though a bit worried that it might last forever).

On the single game front, Descent to Undermountain turned out to be another disappointment. Not in terms of gameplay, because I didn't actually get the chance to play the game (although it is supposed to be a bit rubbish, so I'm probably not missing much). I spent a while creating a character (lovely character portraits, by the way), and then set off to start my life as a hero by wiping out a small band of marauding kobolds. I entered the Yawning Portal tavern which contains (as you might guess) the entrance to Undermountain. I winced at the appalling 3D graphics and ugly, ugly sprites. I entered the first door in Undermountain and...CRASH. I tried again a couple of times with the same result and swiftly gave up. Oh well, onwards!

The next game on the list is...Bloodwych! It's an RPG from '89, popular on the Amiga and ported to the PC. I've heard it's a pretty tedious game, but hey, it's always worth a go.

In other news, my $#&@ing PS3 died again over the weekend. Long-time blog readers may remember it died right back when I started this, so I'm pretty annoyed that it's bricked again, especially as I've hardly played it this year due to the arrival of a certain wonderfully cute baby. Anyway, the good news is that Sony agreed with me that it shouldn't have blown up again so soon, so they've agreed to fix it for free. I rang them up this afternoon and there's a bloke coming to pick it up tomorrow, and a new one should be sent out within a week. So, pleased with the service even though I'm totally disappointed with the product.
Posted by Binkbenc at 18:06