The flippin' PS3 has just died again after barely a month, in which time I played it for maybe half an hour. And it's still got a disk stuck in it, which is great. I think it's fair to say that the original model has reached the end of its natural lifespan. My first PS3 lasted about 4 years, its refurb replacement from Sony lasted about a year, and this latest one lasted only a couple of months. When I spoke to the guy on the phone this morning he said that they were no longer providing refurb original units, so I guess they'd realised it wasn't worth it, too. Why did I want a refurb every time rather than a new model (which I was offered every time)? Because of backwards compatibility. The original could play PS2 games, but the new models can't. That means, unfortunately, that I now have no way of playing PS2 games (well, I have an original PS2 in the attic, but I'm not sure Kate would let me have that out downstairs). I think I might have a look into how PS2 emulators have come along on the PC. Last time I looked they could just about do homebrew, but that was years ago. I don't know if my desktop machine would be able to run it sufficiently, but I got hold of a knackered old work laptop last week (still more powerful than my old PC) that I'm hoping to get up and running as a gaming rig. It barely boots at the moment, and I think the problem is with the memory, so I'm going to get hold of some new RAM and see if that works - if it does, then it'll be a cheap new computer for me. If it doesn't, well...it'll be a heavier bin bag this week.

So, in summary, computers are rubbish and evil. I'm onto my fourth PS3, and it better bleedin' work when it turns up later this week.
Posted by Binkbenc at 10:54 2 comments:

It's a Pirate's Life For Me 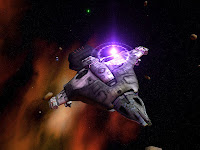 Out last week and busy this week, so today's the first day I've had a chance to get back on the game wagon. It took a little while to remember how to play I-War, but it's pretty fun now I'm back on board. I'm still stealing my way up the ladder as a pirate, but there's been quite a bit of story progress at the same time. I joined a clan and worked my way up their ranks by doing various missions, and I've just been asked to join the next clan above them. Like the previous game, the missions are all very diverse and interesting - for example, my latest was to pick up a bunch of old offline gunstars (basically floating laser turrets) and, of course, something went wrong when I went to pick them up and they all came back online and immediately identified me as a threat. Luckily, they were faulty (that's why they were offline) and had intermittent power failure, so I had to sneakily dock onto each one when the power was down and send my engineer on board to neutralise them. As another example - the mission I've just started involves space graffiti, I've been given a paint droid and I need to fly it out to a rival's base and sneakily spray-paint the visiting governor's ship without him noticing. I've also been getting a bunch of useful cargo and have started trading and upgrading my ship - nothing that exciting, some new weapons and shields and a slightly better engine, but it feels like I'm making progress. It's generally good fun, but one thing has irked me a bit, and that's that you'll randomly get incoming distress calls from freighters being attacked by pirates. Nothing intrinsically wrong with that, it makes the game a bit more dynamic if you suddenly get called away to do things, but it always seems to happen right in the middle of another mission, and can screw things up if you leave half-way through a mission to answer their calls for help. So, what I've started doing is just ignoring them, which feels a little wrong. "No, sorry, I can't come to save your life, I'm mid-way through painting an awesome tag on the side of this ship..."

I'm also stricken with bad, BAD, man flu. I may not recover.
Posted by Binkbenc at 18:07 No comments: