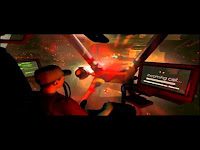 Finally, I've completed I-War 2. A flippin' hard, but enjoyable game. After feeling like I wasn't getting anywhere last time, I decided to focus on storyline missions to try and make some progress. I got a new ship pretty quickly after the last one (I think I should have got the previous ship much earlier, but I didn't take that mission because I was doing a load of side quests), and proceeded to do a bunch of raiding and upgrading to bring it up to scratch. I was only a few missions away from the end of Act 2 last time, though I didn't know it then, and Act 3 didn't consist of too many missions. I think the developers must have some serious issues with capitalism, as in both this and the first game the main antagonists behind all the chaos turned out to be groups of mega-corporations. Still, I can't complain - after a slightly rocky beginning with it while I got used to the controls and the difficulty, I ended up loving the game, and it came to a very satisfying conclusion. Another series done! It looks like I didn't actually check off the first game, so I've added that to the done pile, too, and I also put FTL on there because, hey, it's another one ticked off!

Next up on the series list is the X-Com games. I've been meaning to play these for many years, but somehow never quite got round to it. Looks like there are 5 games in the series, so I'll be at them for a while (6 if you count the new one that came out last year, but I don't own that). I've got the original UFO: Enemy Unknown here, with its lovely (and slightly daunting) 128-page manual. That'll give me some bedtime reading, anyway. Copyright in the manual says 1994 - gosh, can it really be that long! That means I've owned this for nearly 20 years and still never played it. Blimey, I should have started this backlog-busting quest a long time ago.

Ah well, that'll all come in time. First up it's time to go back to Bloodwych and that graph paper and see if I can make any headway there.
Posted by Binkbenc at 16:42