Madden a Box of Frogs 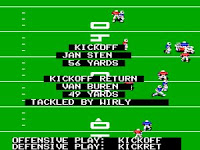 Well, I didn't think it would take me long, and it didn't. Madden is a game where you're the manager rather than the player, so you choose the tactics and your little guys go ahead and play the game. It doesn't help that a) I know absolutely nothing about those tactics, and b) the names of all the plays are in the playbook (game manual) and all you see on screen is the number of it. So while I'd happily tell my boys to go ahead and do the old 79, I had absolutely no idea what that move was or what I was asking them to do. No wonder I didn't fare too well. In my first game, I selected to play a Quick Game rather than a Standard game, figuring that would mean everything would zip along at a faster pace than the hours that American football matches usually take. Well, I was right in one respect. The game certainly did zip along, but I had no control over it. It's essentially (as far as I could tell) a demo mode. You just sit back and watch the computer play. No idea why that was the first option in the menu, but hey! For my next game I selected Standard, and things proceeded a bit more calmly. I selected a few plays (no idea what they were) and lost a bit of ground. Rinse and repeat. Bored. Quit. Onwards!

Next up on the randometer is...(ooh, Ultima added to the series list, I can't wait for that! Anyway, next game is...) Garfield: Caught in the Act! I don't know much about this one. Looks like a fairly standard platformer. Could be fun.
Posted by Binkbenc at 14:36 No comments:

I played a bit of Hi-octane last night and...meh. Did I give it the attention it deserved? Probably not, but I've been away for a bit and I've got a lot of catching up to do. It was a perfectly serviceable futuristic racer in the vein of WipeOut - all floaty hovercars with weapon power-ups. Not really my cup of tea at all, I'm afraid. I think the best I did was come third on the first map on easy...that's how rubbish I was. It's one of those games where you have a fuel meter along with ammo and shields, so there's a bit of strategy when you choose to go into the pits to recharge them and when you recklessly blast on through (it's a bit like F-zero where you just zoom over a differently coloured bit of track depending on what you want to recharge). I dunno, it was fine - it had music, it had weapons, it had racing...it just didn't do anything for me. Onwards!

The next game up on the randometer is...John Madden Football! Oh dear...I can't see this one lasting long, either, I'm afraid. It's the original game in EA's Madden series from back in 1989. Not my favourite sport, and sports aren't my favourite genre, so I'll probably just have a quick blast of this at lunch time and then move on.
Posted by Binkbenc at 11:36 No comments:

Bad to the Bone

Well that was refreshing! Bad Street Brawler is a very basic beat-em-up with a couple of gimmicks. First up are the grannies. On every level, as well as the normal enemies you have to beat up, there are grannies who you have to avoid. If you hit one of the grannies then she'll come after you. If you hit enough of them then they'll come after you for the rest of the game. The annoying thing is that they don't just wander across the screen, they hover around you for a while meaning that you can't hit any baddies for fear of hitting the granny instead. Once they've irritated you for 10 seconds or so, they properly wander away, usually leaving you battered on the floor. The other gimmick is that your attacks change depending on what level you're on. On one level you might have a simple punch, on the next you might have a head butt, on the next you might have a glorious jumping kick, and so on. Some enemies can also only be beaten by certain attacks, dogs can only be patted on the head to make them go away, giant basketball players have to be pounded into the ground, motorcyclists have to be kicked off their bikes, and so on. It's quite a fun little thing that adds a bit of variety to the otherwise dull levels. As far as gimmicks go, I think they're both not bad ones, and I don't know why they weren't inherited by other games in the genre. It would have been cool to have a few innocent pedestrians in Streets of Rage, or to have your attacks change as the game went on. That's not to say this is a great game, though. It's showing its age - you play a Hulk Hogan style character with about 4 frames of animation, and there's a limited number of enemies in the very short levels. There are also only 10 levels, and once you hit 10 it just starts cycling through the last few over and over again. There's no boss (to speak of, though you do fight tougher baddies at the end of levels) or ending - the only object is to keep going as long as you can and then hit the top spot in the leader board when you die.

Another one down, though. Yay! Next up on the randometer is...Hi-Octane. It's a racing game from Bullfrog. I remember playing a demo of it back in the day, but not much more than that. Racing games aren't my favourite genre, so I'll see how I get on with it.
Posted by Binkbenc at 15:44 No comments:

Gosh, it's been a while. Work and life have both been incredibly manic over the last couple of months and haven't left much time for playing or blogging. I did play a bit of UFO back at the start of Feb, just after the previous post, but I haven't played it since and I've mostly forgotten what I was doing. What I do remember was that I was just feeling like I'd screwed up big time. The game had been going okay, I'd built up a decent squad and a few bases, but then realised I'd over-stretched myself. I hadn't realised that when you hire new staff for your bases you have to pay their wages every month (I know, I'm an idiot), so I built bases and hired as many new people as I could, then when the end of the month rolled around I had to fire them all again to get back into the black. Not a great situation. The other mistake I made was to gleefully pour my money into research (something I always do in games, much to my detriment) and upgrade all my interceptor ships to the best models based on alien tech I'd discovered. I funded this project by selling off my old interceptors. "I won't need them", I thought, "I've got my spangly new ships to take their place." It was then that I noticed that the spangly new ships run on an alien fuel source that I can't synthesize, I can only rescue it from downed alien craft. So basically, my interceptors all ran out of fuel and I have no way of making any more or getting any more from the aliens because I have no ships to intercept them. Great! Way to go, Ben. So, where I left it was that I was frantically selling off my other assets in order to raise enough money to build an old-school interceptor that I can use to actually continue the game. Meanwhile, the aliens are enjoying raping and pillaging the globe at their leisure and I have no way to stop them. It's a great game, but I've played it *really* badly. I should probably start again, but I can't quite face that at the moment. I'll give it a bit longer and see if I can get my new interceptor up and running before it's too late.

As a result of this slight hiatus, I'm going to drop Startopia back into the mix - I don't fancy starting up another fairly free-form game at this point - and see if the randometer will throw me something quick and linear I can buzz through. And the randometer says...Bad Street Brawler! A Streets of Rage style beat-em-up from the heady days of 1987. That'll do nicely.

In other news, I noticed one of my readers (I only have two...you know who you are!) playing FTL on Steam. Enjoying it? I thought it was a great little game.
Posted by Binkbenc at 13:05 3 comments: