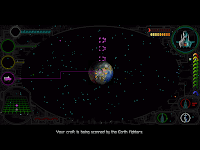 Phew, I finally finished Darklight Conflict. Weirdly, you don't actually see any Darklight until the penultimate mission (it's weird stuff that sucks the energy from enemy ships), but hey. The missions did drag on a tiny bit, but they managed to vary them enough to keep it interesting. There was a middle period where they started to get a bit samey and I was worried it would be like that until the end, but then things picked up, including my favourite mission, the Race Meeting. The enemy Ovons basically had a large race track in space, and on this particular day some of the top brass from their fleet were competing. My task was to chase these race craft around the track and destroy them. Great fun! That, and a few other unique missions, really helped to keep things interesting until the end.

I did briefly mention the story of the game in my previous post, but to recap, you're an earth pilot who's whisked from his ship and thrust into an alien war (by being fused with an alien body and inserted into their ship). You're not given any choice, simply pointed at the enemy and told to fight for your life. The guys you're fighting for (the Repton) are obviously an evil, genocidal bunch, but then so are the enemy (Ovon) dudes (as far as you can tell), so you're in a kind of lesser of two evils situation. You gradually work your way through the Ovon defences until the final mission sees you defending a massive Repton pulse cannon that's powering up to destroy the Ovon homeworld. As the cannon's firing, you periodically get reports on the percentage of Ovon cities that have been wiped out, and it makes you think (a little) about the civilian casualties of the war. Wiping out the Ovon planet and all survivors doesn't feel great. Once that's done, you're given a hero's homecoming by the Repton and they reward you by preparing to sacrifice you. So the real final mission has you fleeing from the Repton across many hyperspace jumps as you try and return to earth. The fun thing about this mission is that you get to turn on the Repton and destroy their ships - including, at long last, the carrier that you've been flying missions from the whole game. I have to admit that it did feel good to wipe the smirk from the Repton faces at long last. It's also great to finally get back to earth and have the earth defence force fly out and destroy the remaining Repton on your tail as you race home. A satisfying end to a fun game.

Next up on the randometer is (please, no more space sims for a while)...Road Runner! An arcade game based on the cartoon. Should be interesting, and a nice change of pace. I should probably return to UFO first, though, before I forget how to play it.
Posted by Binkbenc at 18:15