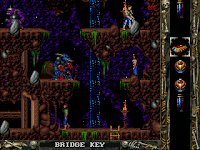 I'm partly relieved and partly annoyed to say that Blackthorne wouldn't work. I tried a couple of PC installers, but the game just hung without starting. I've got the Megadrive version somewhere (that I've played a few times in the past...not sure if I finished it, though), so one day when I'm through the PC games I might add old console games to the list...a few years to go before that point, though!

Anyway, through fair means or foul, it's another one down. The next game on the randometer is...Darklight Conflict! Another space combat game, I didn't realise I had so many of them. My folks are down this weekend, so not sure if I'll have much time to make a start with this one then (and I should really get back to UFO), but I'll give it a go soon.
Posted by Binkbenc at 12:48