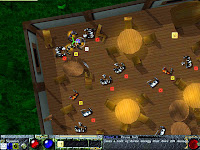 Last night I destroyed my god and became myself eternal. All in a day's work for my trio of monks in Magebane 2. Was it a fun game?...a tentative yes. It had its moments of humour and excitement, but if this is an indie gem, then it's an incredibly rough one. The mechanics don't really work too well, the graphics are serviceable and the gameplay is so-so, but this is the work of one guy learning how to make games, so it doesn't come as a huge surprise. It's way better than anything I could do! Still, it definitely has its problems. The difficulty curve in it is horrific, you go from an incredibly easy tutorial mission to start out straight into a near-impossible fight with a bunch of drunk barbarians. I assumed the point of this mission was to teach you that fleeing was sometimes the most sensible option, but the rest of the missions carried on in much the same vein. But slowly but surely you learn to pick your battles and to use your skills wisely, and to run from danger to recuperate, and you gradually build your health and skills between levels until...well...until you get to the end really. There's never a point where you feel on top of the game, no point where you're a bad-ass who can easily take down the simplest assailant. Every fight is a threat and you need to work hard to get through every level. The smallest goblins can kill you easily when there's enough of them, and the evil mages who spawn an unlimited number of zombies are absolute *$##$%^#. Some of those levels took a lot of reloading! Anyway, I made it through in the end and grabbed the amulet of Yendor (yes, it's that old chestnut again), and I don't think I'll be returning this way again in a hurry.

Next up on the randometer is...The Fourth Protocol! It's a 1987 text adventure based on the Frederick Forsyth novel. Ah well, I'll give it a go and see how I get on. I'll hit Terror from the Deep first, though. I did give it a quick go last night and got wiped out on the first mission, so yup, they certainly fixed that difficulty level bug!
Posted by Binkbenc at 16:40