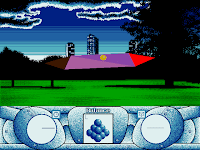 Just had a quick look in the list and realised I have 3 Tintin games, so I've added them to the series list. They're not technically a series as such (I don't think they're interrelated at all), but it might be fun to play through them in order. So that means I need another game to play...to the Randometer, Snowy!

Next up is...Ooh, Costume Quest! My first PS3 game of the list. I look forward to that. I played the demo of it a while back, and then received the full game on Plus. This might sound a bit splitty, but I'm going to create a separate PS3 list. This is purely for the reason that the PS3 isn't available to me in most of the downtime when I play on the PC, so it'll put the brakes on the completion quest if I have to wait to finish PS3 games before moving on. So, Next up on the randometer is...(yay, Tomb Raider added to the series list)...Balance! Never heard of it before. It looks like the computer equivalent of one of those games where you have to tilt a maze to move a ball bearing round to the exit hole. Kind of like Marble Madness, but you move the level instead of the marble. This one might not stick around too long!

...That was shorter than I thought. You need copy protection codes to get past the first level, and I don't have the manual. Next! And the Randometer says...Z! This is an old RTS made by the Bitmap Brothers. I remember playing the demo on an old PC Zone cover disk back in the day and it seemed pretty fun. The series list is getting ridiculously massive, though, so I really should pop back to X-Com Apocalypse first.
Posted by Binkbenc at 13:38