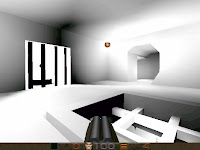 I blasted through Dissolution of Eternity and finished it last night. Not much to say, really. It's basically Quake. The new levels are generally good, and it's nice to have some continuity through them. For example, the first part is based in a castle, the first level has you outside the castle trying to get in; the second part has you entering the grounds trying to make your way to the keep, and so on. It felt like there was a bit more believable architecture to the levels (if you can say that for an insane techno/fantasy world). The second part of the game goes a bit weirder. You're transported through a series of themed worlds - elemental planes, Egyptian pyramids, Aztec ruins, and so forth - on your way to destroy Quake's temporal thingummy machine (yes, I've forgotten what it was called already - It's Quake, story's not its strong point). This threw all continuity out of the window, but did mean a bit of relief from the dingy brown corridors of the base game (although there was still a phenomenal amount of brown to be found). It also introduced more 'boss' enemies; stronger creatures at the end of each set of levels. It was a good gimmick that the original Quake might have benefited from a bit more. The final boss of the game was the huge dragon that featured in the original Quake test level (I remember playing the death out of that!) and was a suitably tricky ending to the series.

I do have another Quake add-on - Shrak for Quake, so I thought I'd give that a go next while I had Quake installed. Unfortunately, something happened to the textures when I installed it and the game played with just white walls and shading, making it a surreal, but impossible play experience (see piccy). So I'll call it a day and skip that one, it's probably enough Quake for me.

Next up on the randometer is... The Great Escape. Yikes! It's an old Ocean game from 1987...sounds crazy.

In other news, I failed in my resolution not to buy any games this year.Crusader Kings 2, a game that I realllly want to play one day was in a pay-what-you-want bundle and I couldn't resist. It'll never be that cheap again so I had to grab it...I know, I know, I'm weak willed. I'll try not to get any more.