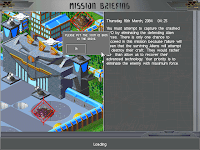 It's been a while, so I thought I'd write a quick catch-up post. I've made quite a bit of progress in X-Com Apocalypse, but it's just so slooooow. Researching new techs takes a while...building new techs takes an age...and all the while you're constantly under attack from the aliens. I guess that's the whole point of the game, but even so, it feels like I'm at the point in the game where I just want to get it finished. I've finally made it to the alien homeworld, and I'm going around systematically destroying the buildings there. You can't just do this in one run, though. For each building you need to visit the alien dimension to see the building, then come back home so that your scientists can research it and find a weak point. You've then got to go back to the alien dimension and land a squad in the building (while fending off a bunch of attacking aliens) then use that squad to disable the building (by destroying certain structures) while fighting off the usual mass of increasingly difficult baddies, get back to your ship, and make it back to earth. Then you've got to rinse and repeat for the next building in the chain. I've done about three buildings so far; I don't know how many there are in total, about 10 or so. Each building takes a long time, maybe a couple of play sessions, and they're getting harder as they go on. It's getting to the point where I feel like jumping out and playing something else for a while, but I'm so close to the end now that I just want to get it finished. Hopefully the next post will be a Won post. Oh, I also hit an 'insert CD' error, which worried me a little bit, but I reloaded and managed to avoid it. I've taken to saving before the start of every mission, so when I hit it again (which I have a few times) a quick reload fixes it. I guess there must be a particular missing asset that sometimes pops up in the randomly generated levels. The joys of dodgy software :)

In other news, I've also been playing a bit more Kingdoms of Amalur, and have made it to the second continent. The story's moving along a bit quicker now, so I feel like I'm getting somewhere...but, of course, the new continent brings a bunch of new side quests, and my crazy brain says I just have to finish them all! I have to admit, the second continent's bigger than I thought it would be, which is a bit daunting, but hopefully I'll be able to power through it. I set myself the target of trying to finish the game by the end of the month so I can play Costume Quest on Halloween (when it's based), so...we'll see.
Posted by Binkbenc at 11:52