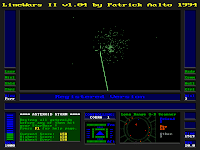 Ugh. I'm sorry Line Wars, I really am, but I just wasn't in the mood for you. Line Wars is obviously made by someone who really loves Elite. I really love Elite, so that's not necessarily a bad thing. But Line Wars is purely a replication of the combat aspects - no trading involved - and it's a direct copy. The ship models are the same (they even have the same names), the handling's the same, the radar's the same(-ish). It's a perfectly serviceable game (but it ran really rubbishly for me), it's just a bit pointless. It's shareware, so it's made by someone who wanted to try their skills on building a version of Elite - that's fine, honourable even, but Elite's already out there and is a fuller, better game. Why would I want to play Line Wars? (Answer: I don't.)

Moving on - the next game up on the randometer is... The City of Lost Children. It's the game of the film...which I've sort of seen. I was ill when I rented it and fell asleep through much of it, so I remember bits from the beginning, but not much else. Could be fun.
Posted by Binkbenc at 15:50