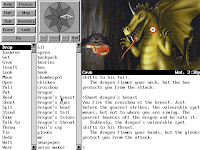 Eric the Unready is a funny old game, in more ways than one. In fact in two ways: it's funny and it's old. Not old in the sense of being released a while back, but old in the sense of fashioned. The company that made the game, Legend, was made up of Infocom staffers, and if there's one thing Infocom was famous for, it's text adventures. Eric, and all of the other Legend games, as far as I know, is basically a text adventure with a picture stuck in one corner...a bit like The Hobbit on the Spectrum. There's even a mode where you can turn all of the interface guff off and just play it as a straight text adventure. In a slight nod to modern technology they gave it a mouse interface (buttons for directions, and allowing you to click on words to select them instead of typing them), but to be honest, it's usually much quicker to just type the words in. The only thing I really used the mouse for was that you could click on parts of the picture to find out about that thing, so instead of typing 'look at parrot', you'd just click on the parrot. The rest of the interface was clunky as heck, though, you really needed to create full sentences to make the game understand anything. So, to use a crowbar on a crow, you couldn't just click on the crowbar in your inventory and then on the crow in the picture. You couldn't even click on 'use', then 'crowbar', then 'crow', the parser still wouldn't understand. Instead, you'd have to click on 'use', then 'crowbar', then 'on', and then 'crow'. It made the whole thing infuriatingly slow, and much easier just to type. Once  that's out of the way, though, the whole game becomes much more enjoyable. Some of the puzzles are a bit obtuse, but nothing too ridiculous, and there is a consistent level of humour running throughout - not really laugh out loud stuff for me, but I had a wry smile on my face every now and then - especially at some of the small ads that ran in the newspapers you read every day. I also appreciated their take on pirates as respectable small businesses. Alongside the standard adventuring, there were also a couple of..well, in any other adventure game I guess you'd call them 'arcade sequences', but here there were slightly more text based. Things like having to play and win a game of jeopardy, which just dragged on way too long and weren't at all necessary. Another was the dragon sequence shown in the screengrab. The dragon's weak spot  changes every turn, and you have to fire an arrow at where you think the weak spot is going to be that turn. As far as I could tell, the next position of the weak spot is completely random, so you just have to sit there typing in the same target every turn until the game chooses it and then you win. Completely pointless, and the rest of those sequences were similarly disappointing. Anyway, the pure text adventure bits were fun, and it was nice to have those reminiscence spots tickled - it really took me back to playing old text adventures on the beeb.

It's magical secret game day today (although half of it was wasted by a trip to the doctor this morning), so hopefully I'll be able to hit something else and get another post out today...we'll see. Next up on the randometer is...Darkstone. It's an action-clicking Diablo clone. I remember it well from ads of the day...and I *think* I played the demo, but can't be sure. Anyway, I'll fire it up and give it a go!