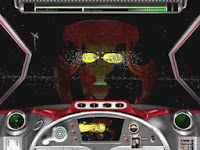 At long last, X-Com Interceptor is complete. I changed my strategy a bit, upgraded my bases and ships, and started sending out a lot more probes and patrols to find the enemy bases. With that done, I was able to take the fight to the aliens a bit more and start clearing out their influence in the sector. Once I got the hang of things I started to enjoy it a lot more. I think if I'd played it at the time on a decent computer then I would have loved it. As it was, the arcade sections just played out too fast for me to really be able to do any dogfighting. Later on, I got guns with auto-aiming that meant I could actually take a part in the fights, but before that I was really depending on my wingmen and many missiles to do all of the work. The strategy part was okay, but a bit limited. I really wanted to be able to build more than 8 bases - that felt like a very artificial barrier. It meant that I had to constantly destroy my own bases at one end of the sector to be able to build more at the other end. Once I had better engines for my ships and better radar, then things evened out a bit, but it was a real pain. I read afterwards that the starting position is random, and I started out down in one corner, so maybe if I'd been more central to begin with then it wouldn't have felt that bad. I also felt that the story was a bit of a let down. the X-Com games have never been very story focused, so it's not too much of a surprise, but this one felt very much tacked on. There were a few random side missions and a bit of back story, but it didn't feel like the story had any real relevance until the final mission of the game. It would have been nice to have had a bit more reason for doing what I was doing. As I say, it was a fun game, and I think it would have been more fun on a more appropriate computer, but it definitely had its problems. The ending was good, though - I loved the spoof newspaper stories.

Anyway, onwards to X-Com Enforcer!This is even less like an X-Com game than Interceptor was. They basically threw all of the strategy out of the window and turned it into a complete arcade game. It's a 3rd-person shooter where you just run around blasting away aliens and saving civilians. I had a quick go at it - it's very fast-paced, and actually quite fun the little I played of it, but it's absolutely nothing like X-Com. I'm not really sure why they used the name at all. You do find alien technology that you research to build your own new weapons, but it's just a case of "pick up the glowing thing to get a new gun". I've no idea how long it's going to be, but the first few levels flew by, so hopefully it won't outstay its welcome. In other news, I did one more level of Quantum Conundrum, so slowly making progress there. Oh, and I foolishly purchased a couple of Puzzle Quest games on Steam - I couldn't help it, they were only 70p each - so expect me to become horribly addicted to those all over again. Yay.
Posted by Binkbenc at 17:52