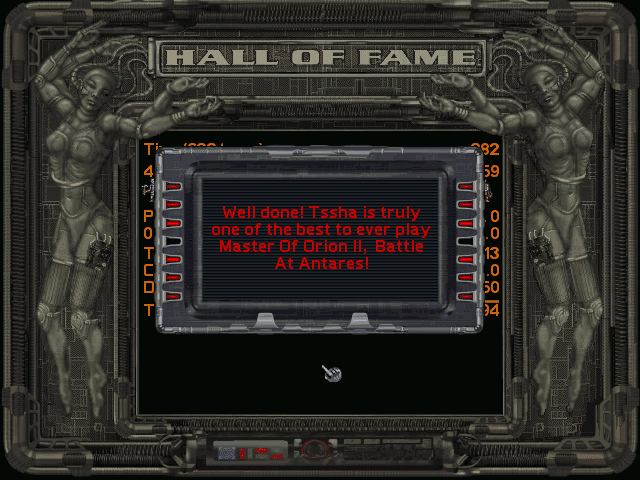 So here's a turn-up for the books. Not just one, but two Master of Orion games finished! The second game is very much an evolution of the first, and I blitzed through them both in two completely hooked evenings. I only played through them on Easy, which any MOO player will tell you isn't really completing them at all, but it's good enough for my quest. That's not to say that I wouldn't happily still be playing them otherwise. MOO is an incredibly great game. It sucks you in and has enough one...more...turn addictiveness that time just melts away before it. There are a multitude of starting races (you can even create your own), each with different enough attributes that they feel different to play and lend themselves to a different strategy when you play them. I've always been a 'research as much as possible' guy, because I want to see everything that the game has to offer, so I favoured the Psilons with their huge bonuses to research, but there are also races who favour exploration, or space combat, or ground combat, or spying (espionage can be extremely powerful), or production, or population growth...you name it, there's a race that specializes in it. You can conquer planets, you can create planets, you can recruit legendary leaders or pilots, you can design your own ships, you can build huge fleets, you can create wormholes, you can steal technologies, you can frame other races, you can warp to other galaxies, you can fight the guardian of Orion...you can do so much, and you can see why I had to stop playing it! It's the kind of open-ended game that you could play on and off for years, like Civ, and never feel you'd explored every strategy. Maybe once I've finished this quest I'll return to it, in another lifetime, but for now I'm happy to have played it and happy to move on.

Next up on the series list are the two Paladin games from Omnitrend. They're party led turn based strategy games, a little like a medieval X-com. I remember seeing adverts for them many, many years ago, but I've never played them before. One of the big innovations in the Omnitrend games was their interlocking system, if you owned one of their space battle games and one of their ground battle games then you could combine the two so that when you entered a ground war in the space game it would switch to the ground game to play out the fight. It sounded intriguing at the time, and I've always wanted to try it. Anyway, that'll come later when I play the Breach games, I don't think you can do it with the Paladin games (although, bizarrely, you can apparently import your characters from Breach 2 (a futuristic battle game) into this medieval one, so I'm not entirely sure how that would work!). I'm going to go back to Darkstone first, though, and see if I can knock that one off.
Posted by Binkbenc at 10:32