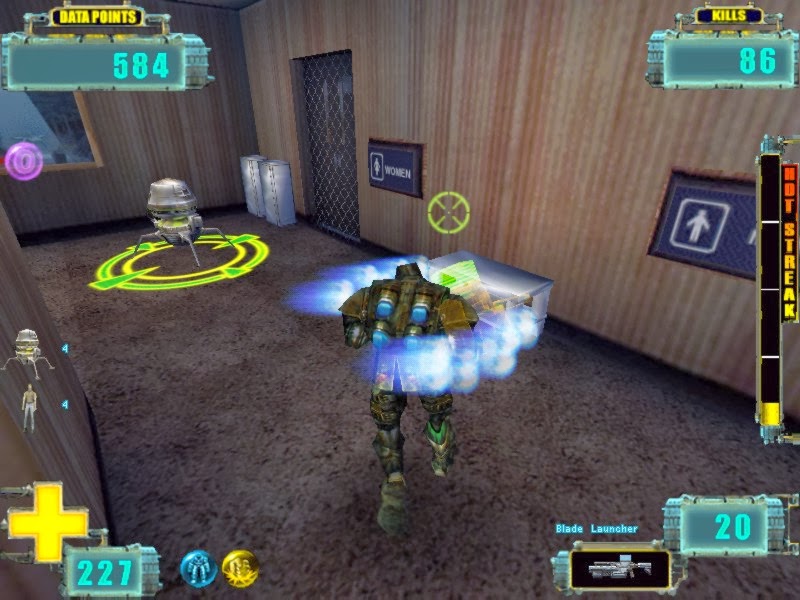 X-Com: Enforcer is done and dusted, and with a great sigh of relief that's all of the X-Com games on PC finished (I still have the new version on PS3, but I've added that to the PS3 list). As I've mentioned already, Enforcer has absolutely nothing in common with the other games in the X-Com series other than a couple of alien designs (and even those are a bit questionable). It's a full-on action game without a whiff of strategy about it, but that's not to say it isn't fun. I actually really enjoyed it; it was nice to have a bit of dumb blasting after all that needing to use my brain, and it was short enough that it didn't outstay its welcome. In fact, the game fits pretty perfectly into my blog's mantra, with each level only taking about 5 minutes. You just warp in there, shoot everything that moves (and the spawn points, which don't) and then warp out. There were a couple of levels where you had a time limit to survive for, or some hostages to rescue, but they never strayed far from the basic template. The whole thing ran at a good clip, with tons of enemies and explosions flying off at the same time. About those explosions...this game loves its explosions. Some of the weapons have such large and bright blasts, that you basically can't see anything when you fire them - you just run around blindly with the fire button held down hoping that one of the aliens is foolish enough to walk out in front of you (they usually are). There's a slightly odd weapon system. You can only carry one gun at a time, and as soon as you walk over a pick-up icon that new gun replaces your old one. Each gun also has limited ammo, and when you run out you default to a weedy laser (or machine gun once upgraded). This means that you never have a chance to just favour one weapon, you're always picking up whatever comes (new weapon drops appear frequently) and you're constantly swapping your weapon. To be honest, all of them (other than the freeze gun) are pretty good once powered up (through upgrading with tech points), so it doesn't really matter which gun you have. That's not to say that some aren't better than others. My favourite was the grenade launcher. Normally they follow the old Quake model of having a single grenade pop out of the end of the gun and bounce about, but not here...oh no, a single grenade isn't enough for the Enforcer! Once powered up, the grenade launcher fires a constant fountain of hundreds of grenades, spraying out in an arc in front of you and obliterating everything in a wide radius. It's gleefully ridiculous (the whole game is played with tongue firmly in cheek), but all good fun. There isn't a lot of story to speak of, but the end of the game is tinged with melancholy, which I wasn't quite expecting. It kind of leaves things open for a sequel, but obviously one never appeared. So, all in all quite a fun diversion. Best just to forget the "X-Com" bit at the front and just call it Enforcer, and enjoy it for what it is.

So, what's next on the series list, is it going to be the first non-sci-fi game since August 2012? No, it's more sci-fi strategy in the shape of Master of Orion, or MOO to its fans. One of the original 4X games, and known for its addictiveness (especially the second game). I had a small taste of that last night when I installed the game and fired it up to make sure it worked, then next time I looked at the clock hours had passed. I was doing pretty well, too, except the sun in my main system just went super nova, wiping out most of the population and my main source of production just as the enemy race are starting their campaign against me. I can't wait to fire up the save game and see if I can rescue it! Depending on how things go, it looks like I might be able to get through the first game fairly quickly...not so sure about the second. I'll probably do that before getting back to Darkstone.
Posted by Binkbenc at 10:09