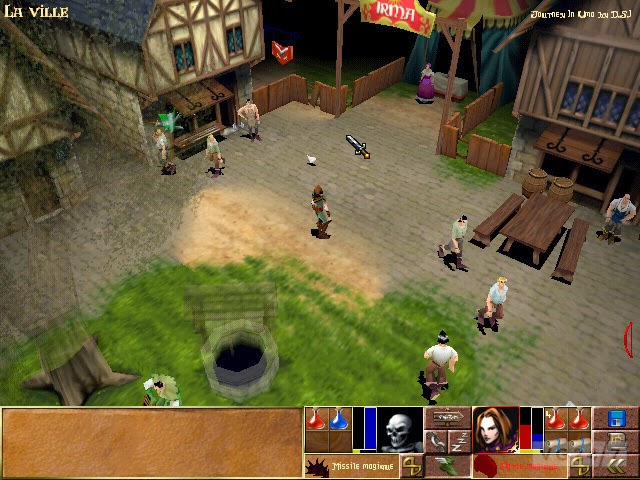 I finally finished Darkstone over the weekend. I guess there must be something really compelling about these Diablo clones, because I can't imagine why I'd have stuck with it otherwise. Well, that's perhaps a little unfair to it. The game gets a lot of love from its fans, but the experience was ruined by some bugs/emulation flaws. First up, the graphics looked awful. It's an old game so I wasn't expecting modern shininess, but there's quite clearly a bug with the rendering (sounds like it's a driver issue) that means all the graphics are incredibly pixelated and blurry and the text is unreadable. Not the game's fault, but still. (Even worse, this was a GOG game that I'd paid for, not just a random naughty download.) The other thing was the crashing bug. When I say it crashed, I don't mean every now and then, I mean literally every few minutes the screen would freeze and then kick me back to the desktop. As I think I mentioned before, there's a handy 1-button quick save function, so as long as I remembered to hit that every time I did anything noteworthy then it wasn't too bad to reload and pick up again, but wasn't exactly conducive to a smooth gaming experience. Combined, those two bugs pretty much ruined the game for me, but I still stuck with it until the end it. That's got to say something for it!

It is a pretty standard Diablo clone. The main innovation was the fact that you could have another character along for the ride, but I found that he just got killed so often that I tended to just leave him dead and go solo. Another conceit was that the quest structure was randomly generated, so out of a pool of 21 main quests, each time you start a new game it will pick 7 of those for you to encounter, so you kind of have a different experience every time. I *think* the dungeon design is randomly generated, too, but I'm not about to play through it again to check. That randomness is all well and good, but none of the main quests ever really felt that different - they're all just 'go into dungeon and kill stuff to get crystal' - so having a different set of quests to play through isn't that exciting. The other problem is that the dungeons all look exactly the same, and they're all incredibly dark, so you never really get a sense of doing different tasks in different areas. You also get given side quests by villagers, but then those villagers are never marked (and I never wrote them down) so when you return from a dungeon it's a right pain trying to find out who gave you the quest in the first place (you can't ask them, they all just give the same response, so you have to 'use' the quest item on each villager until one acknowledges you). One thing I did quite like was the videos. Graphically they weren't all that, but I thought they were quite nicely directed and animated. Anyway, it's finally another one down, and it feels like the first singleton done in a while. So, without further ado, next up on the randometer is...Black & White. Hmmm...mixed feelings about that. I bought it on disk in a rush of excitement when it first came out, but I couldn't get into it at all. All the mags were raving about it, and I was a big fan of Lionhead, but...meh. Hopefully time's improved it (or mellowed my disappointment in it!). I might hit the Paladin games first, though.
Posted by Binkbenc at 15:54