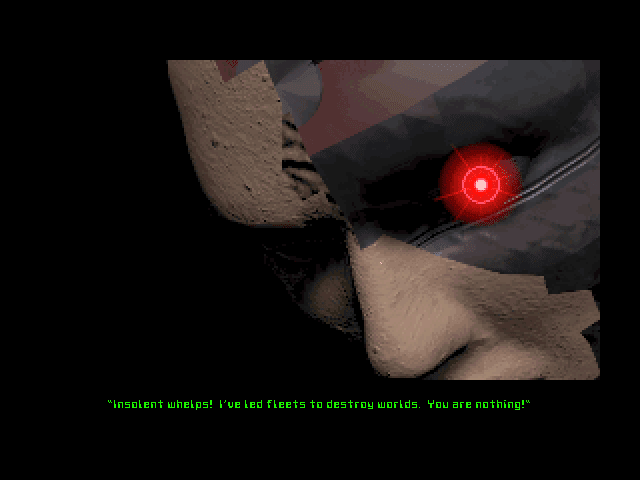 At lunchtime today I finally polished off Chronomaster. I was wrong about one thing - it's not an FMV game, it just has lots and lots of bad '90s pre-rendered animations. The style has a certain charm, and it's good for what it is...but it's pretty fugly. Other than that, it was a fairly standard adventure set in a unique premise (penned by Roger Zelazny) - in the far future you're on a mission to track down some pirate leaders who organised a massacre on a distant world. Each of these pirates is in their own pocket universe, giving rise to a lot of extremely varied locations. The puzzles are pretty much all of the standard 'use object from inventory on other object' style, but they were all fairly obscure. There were some that I don't think I would have got at all without the help of a walkthrough. I didn't use it all the way, though, I made a lovely map of a crazy maze all on my own (I considered scanning it in to put with this post...but it's not that exciting). The other thing was that the game was extremely slow. The main guy, Rene, walks incredibly slowly, and there is a loooot of walking to do. The aforementioned maze was particularly frustrating on this point because there was so much wandering around and backtracking while I tried to map the place. Oh, but as a massive plus point, it does have Ron Perlman as the voice of Rene. This was in his early-early days, but he lends it a sort of bored but obliquely fascinated charm. Another one down. Onwards!

Next up on the randometer is...Oooh, Fable! Lionhead's magnus opus (it's got to be better than Black and White, anyway). I think the others are all XBox only, but the first one is on PC. It won't run on my old machine, so I might try and give it a go on the Surface tablet...it'll be an interesting experiment, and might mean I return to Ishar 3 on my old machine to play them in tandem. I am very much looking forward to Fable, though. My claim to Fable fame is that I playtested it at Lionhead while there for a job interview. They asked me to come back in a different position, but at that point I'd already accepted another job...ah, what could have been. I wonder if they acted on any of my playtesting suggestions? I also had a go on another game in development - BC - while I was there. I don't think it was ever released...a shame, it was quite fun from what I remember.
Posted by Binkbenc at 17:37