Rushed Through the Kingdom 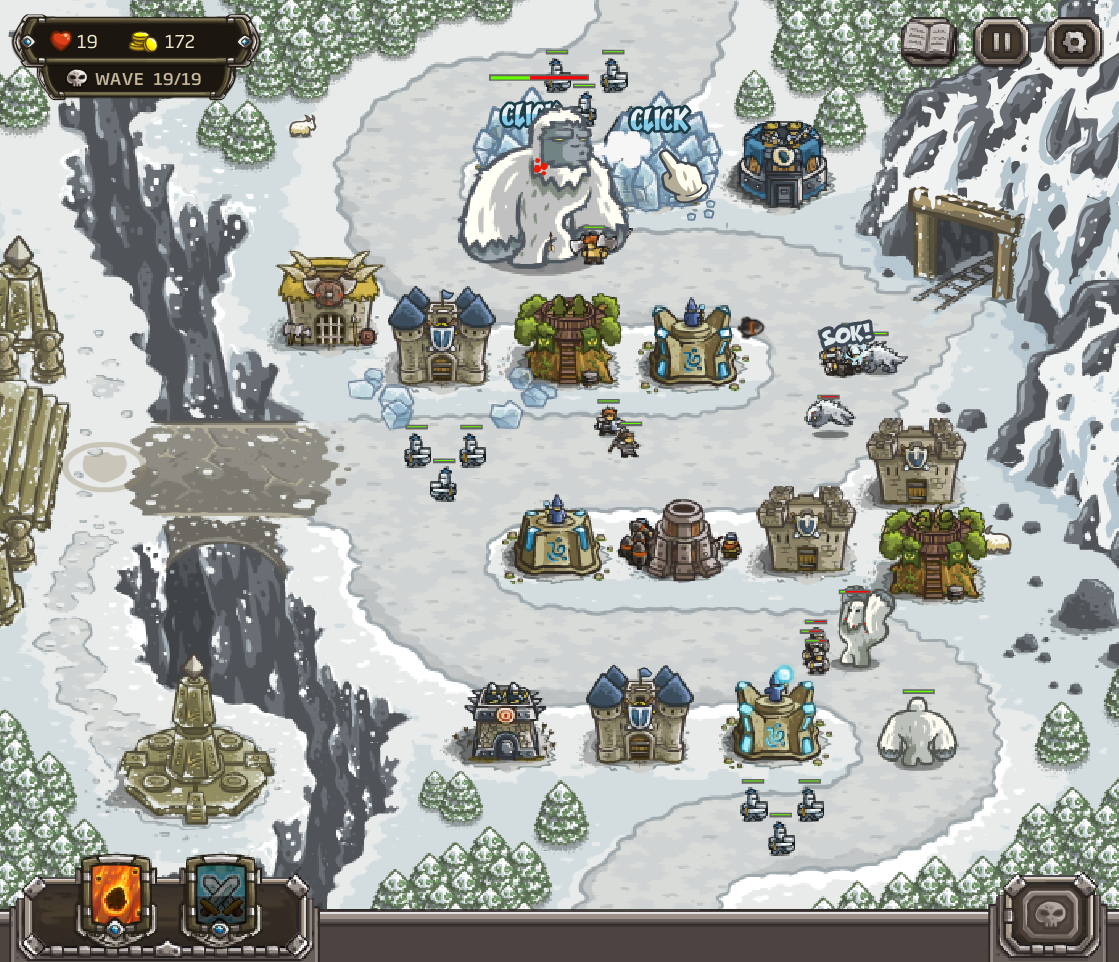 Not a great deal to say about Kingdom Rush. I finished it last night, and it was a pretty standard tower defence game. There are only four basic tower types, but each has a split upgrade path, allowing a total of 8 different (but quite similar) towers. For example, your basic soldier tower can upgrade into either knights or barbarians, each with different abilities, and so on. It's originally an iPhone game, so that's the reason for its simplicity and for its bite-size level design, which suited me down to the ground. Actually, on that point, it would have been good if they'd included some kind of fast-forward option. As with all tower defence games, once you've got your initial towers set up, there's not much you can do until enough money rolls in to build a new tower, so fast-forward lets you zip through that downtime. To be fair, Kingdom Rush does introduce a couple of ways you can interact with the action during that time. First, you have a hero unit. The hero unit is under your direct control, so you can send him to trouble spots to help out. I did move my unit a couple of times, but most of the time I just left him by one of the monster spawning points and let him level up. The second thing is that you have a couple of powers on cool-down timers. You can use these powers fairly regularly to affect the action. The first power is a couple of bonus troops that you can place anywhere on the screen and use to bolster your defense in that area. These were incredibly useful, and I used them constantly throughout the game. The second power is a quick meteor shower that you can use to target troublesome enemies. I didn't tend to use this as much as I perhaps should, but it was good to have around in emergencies. I played through the whole campaign in casual mode. Each level also has a couple of extra challenges that you can do on it (usually adding a limitation to the map, such as only allowing you to use a single tower type), but I'm not feeling compelled to play through the entire game another couple of times just to get those achievements. It was a good game for what it was, and didn't outstay its welcome. There are better TD games around, though, and hopefully there are a couple of them on the list that I'll get to one day.

As a quick aside, this is one of the most up-to-date games I've played. The game is still in development (and still a bit buggy) and it was expanded while I was playing it with some new levels. From the empty areas of the map, I guess they're going to continue expanding it, but I don't think I'll be revisiting it.

Next up on the randometer is...Operation Body Count! Oh dear, I hadn't heard of this before, but it sounds terrible. Long-time readers (hey, there must be at least one) may remember Corridor 7, the not-so-good Doom clone that I completed a couple of years ago. Well, this is the game the developers made before that. It's another Doom clone, but purportedly far worse than Corridor 7 that succeeded it. Yay. I guess this is just what I need to force me to play Ishar 3! I did actually make a start on it and got as far as creating a new party before giving up. I'll head back into it as a priority.
Posted by Binkbenc at 13:17