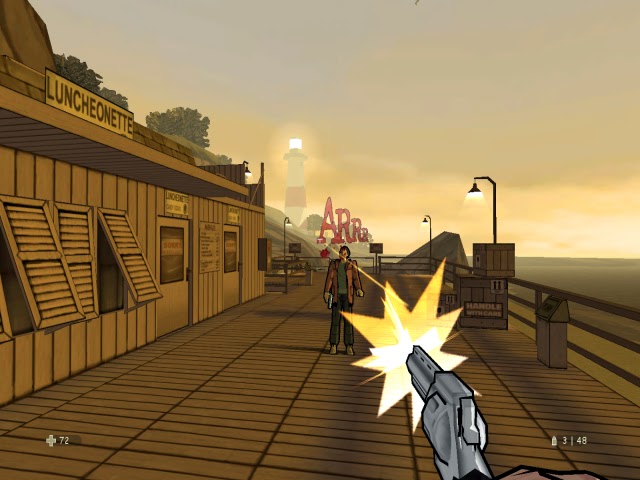 I actually managed to complete something on this year's magical game day! XIII was a game that was obviously meant to succeed. It's a beautifully polished thing with some top-notch talent attached to it (including voices by David Duchovny, Eve, and Adam West...though I didn't recognise any of them until I saw the credits), and it ends on a 'to be continued in the middle of a big conspiracy. Unfortunately, sales obviously weren't what they wanted and a sequel was never made. I think it's a combination of the cel shaded graphical style not gelling with the masses and the slower pace at a time where FPSs were all about speed and gritty realism. Of course, those 'real' games look pretty terrible now, while XIIIs cartoon graphics still look beautiful. I loved my time with it - I much prefer a slower pace to my shooting games, always hanging back and sniping rather in-your-face blasting, so XIII really suited me down to the ground. There was a good selection of weapons (including many mundane items you could use for knocking people out) and a few fun gadgets to play with. The story was pretty fun and pacey, though a lot of the characters did feel a bit paper thin - I guess because you need to read the comics to fill in the blanks (something I'd love to do). There were a couple of nit-picks - a few too many 'escort' missions and instant death situations, and a checkpoint-based save system that sometimes got a bit frustrating - but otherwise it was a great fun game, and one that I wish they had released a sequel for, I'm itching to know how the story ends.

I also had a quick playthrough of Vector TD on the PS3. It's a mini, and a Tower Defense game (as you can probably guess from the TD of the title). The other part of the title you can probably guess is that the graphics are glowing vectors, giving it quite a clean style. It's a short, fun game, but it gives up all its content in the first few minutes, meaning there isn't much to go back for. There are some nice bonuses that you get every few waves for defeating a special enemy, but otherwise it's a fairly standard selection of towers.

Next up on the randometer is...Hmmm...Counter Strike - I've played it before and it's multiplayer only, so I think I'm going to mark it as complete here and move on. So, really next up on the randometer is...Wings of Fury! I've not heard of it before, looks like a side-on arcade flying game. I might have a quick look now and if it looks like it's going to take a while I'll switch back to Ultima 3.
Posted by Binkbenc at 14:57