Bureaucracy is done and dusted. It was an interesting game, but I find it harder and harder to get back into old (or new) IF games nowadays. I'm a words person, so I *should* like reading games made of words, but I kind of feel like when I want words I'll read a book; when I want a game I want to play. I suppose the 'interactive' bit should be what sets this apart, but these games usually only have one 'true' narrative arc anyway, so your interaction doesn't really affect the story that you're reading. All you can do is make a mistake and end the story prematurely and then go back and try and read/play it again. It doesn't feel satisfying to me. Now this is definitely a recent thing - I used to love text adventures back in the beeb days - so I don't know if it's just because IF games don't lend themselves very well to short bursts of play, they require you to play slowly and be invested, or because my brain's moved into a more flighty adult mode. Anyway, whatever it is, I just don't seem to have the patience for them like I used to. This game in particular doesn't help that feeling. This is a game that's designed to frustrate you, it's all about getting annoyed with the illogical bureaucratic system and trying to cut through it, but going face to face with illogical bureaucracy isn't really something that I want more of in my life! There are deliberately arcane forms to fill in, people that you have to talk to multiple times to get the answers you need, rings that you need to run around in order to get anywhere, locations that will become inaccessible to you at random intervals. These kinds of things just aren't that fun...they're not meant to be. It reminds me a bit of when the Spellcasting games decided they really did want to be college simulators...I play games to get away from that kind of thing. Anyway, time to move on.

Next up on the randometer is...Suspect! It's another Infocom text adventure, and this time you have a limited time in order to solve it. Eek, not exactly what I wanted next!

And...it doesn't work. There are files missing from the zip so there's nothing to run. Have to admit, I feel a little bit relieved. So, next up on the randometer is...Log!cal (yes, with an exclamation mark in the middle). It's a puzzle game where you have to arrange balls into groups of four. I'll have a go, but it should be over with quickly.

And...that was quicker than I thought. Another non-starter. This time all that was in the zip was a crack for the game but not the actual game itself. That'll learn me for downloading dodgy copies of games! Okay, third time lucky. Next up on the randometer is...Conquest of the New World! This one's a GOG purchase, so should all be working! It's a long-form strategy game as far as I know, so I'll see if I can clear Ultima 4 first, then come back to this and give it my full attention.
Posted by Binkbenc at 11:50 No comments:

Well, that didn't take long. Kick Off is very much a step back to the heyday of Sensi and the early FIFA games. It took a while to work out the passing and shooting, but I got there in the end. There's no man-to-man passing here, it's all hit and hope. The ball fires out directly along the direction your player is facing, and it's then up to you to get someone on the end of it. The computer AI isn't great at doing this for you - you'll often find that when you play a through ball to someone up the field, by the time the ball gets near to him the computer has already run him off in a completely different direction. The solution is to kick the ball then quickly switch to the intended recipient and get him on the end of the pass. Shooting is a similar mechanic with the amount of time you hold down the shoot key denoting the power (and height) behind the shot. Scoring does seem really hard. I didn't score once in the time I played it, but then the computer never scored against me, either. I even left the room for a couple of minutes to sort out the kids (I couldn't find a pause key) and when I came back, the computer still hadn't scored against me. The other funny thing about it is the sliding tackles, these go on for quite some distance, and if they connect then the player that was hit goes flying for about a third of the length of the pitch! And that's not even counted as a foul (I did check, and fouls were turned on), I'd hate to see the tackle that does count as a foul. Anyway, it was quite fun for a short spin, but it was never really going to be a keeper. (...a Keeper...get it? Of course you do. It wasn't even a joke.)

Next up on the randometer is...Bureaucracy! It's an old Infocom text adventure written by none other than Douglas Adams. Should be interesting.
Posted by Binkbenc at 20:50 No comments: 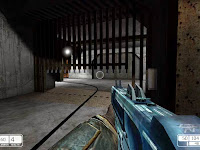 It's been a while, so a bit of a summary post here. First up, I completed Chaser. It was a fairly standard FPS with more of a story than most. The themes are loosely based on Total Recall, with various mind-swapping shenanigans and an ending that leaves things open for the sequel that never was. Gameplay-wise, it's mostly standard, with some odd ideas that are thrown in once and never appear again. This leads to a few slightly frustrating issues, for example, there's one area you need to escape from by climbing a grate...that's the same as hundreds of other grates in the game that haven't been climbable. A similar thing happens with one section of wire you can blow up, but every other section of wire that looks like that in the game is invulnerable. Little things that could have done with slightly better signposting. There are maybe 10 weapons in the game, but they all perform in much the same way, and there were four, maybe five of them that I never used at all. There's a 'bullet-time' ability that is never referred to in the game and I didn't use it once - it feels like they threw it in there but didn't really know what to do with it. It's a long and varied game, though, with plenty of action to keep things moving at a lick. There's a good bunch of different levels, such as one set underwater in a ship graveyard (that plays a bit like Descent), one that sees you holed up in a light-house sniping targets miles away to provide your comrades with safe passage, another that has you in a mech suit defending a base from enemy mechs and planes. It doesn't work perfectly all the time, but it keeps up your interest in the game. The start of the game has you working in a mafia-led city (that felt a lot like Kingpin), then you're off to Siberia, a rocket launch facility, and Mars, amongst other places. I enjoyed all the travelling about, though it did feel a bit drawn out in some places. Some bits were also annoyingly hard, and there were a few too many places where I got hopelessly lost and was wandering around for ages before finally escaping. It really felt like with a bit more play-testing and polish, this could have been a fantastic game. As it is, it was merely a good one, but that's okay with me.

Next up was Manhole. I had this listed as the first game by the developers of Myst, but it turns out it wasn't that at all. It was instead a homebrew conversion of an old Game and Watch title, so you can imagine the gameplay was pretty simplistic. Essentially, there's a bunch of streets with manholes missing and you can temporarily place a manhole over one of these holes to prevent pedestrians from falling in. As the game goes on, the pedestrians come thicker and faster and it soon becomes impossible to save them all. A small, fun and addictive game to while away the odd minute here and there.

Finally, I also had a go at Defender of the Crown. I know this is one of the most beloved of Cinemaware titles, but I just couldn't get on with it. I think the big problem with all of the Cinemaware games is that they depend a lot on perfect timing and, as such, they don't emulate very well. I could spend ages tinkering with DosBox, but I just wasn't in the mood. I managed to win a few sword fights, but jousts seemed completely beyond me, and the computer seemed way overpowered in the standard game. He'd be attacking with super-armies made up of hundreds of knights while mine still consisted of about 10 footmen each. Ah well, I'll just have to assume it was better on the Amiga and leave it at that.

Next up on the Randometer is...Kick Off 3! Oh dear. I'll give it a quick go tonight, but I can't see it lasting long.

I've also been playing a little Ultima 4 but haven't got very far in it, Fate led me to a fighter this time, so I've been wandering around doing good deeds. Back in the old days we were convinced you had to be a shepherd to win the game, and to this day I'm not entirely sure if that's true or not. I don't think it is, but we'll see.
Posted by Binkbenc at 15:58 No comments: