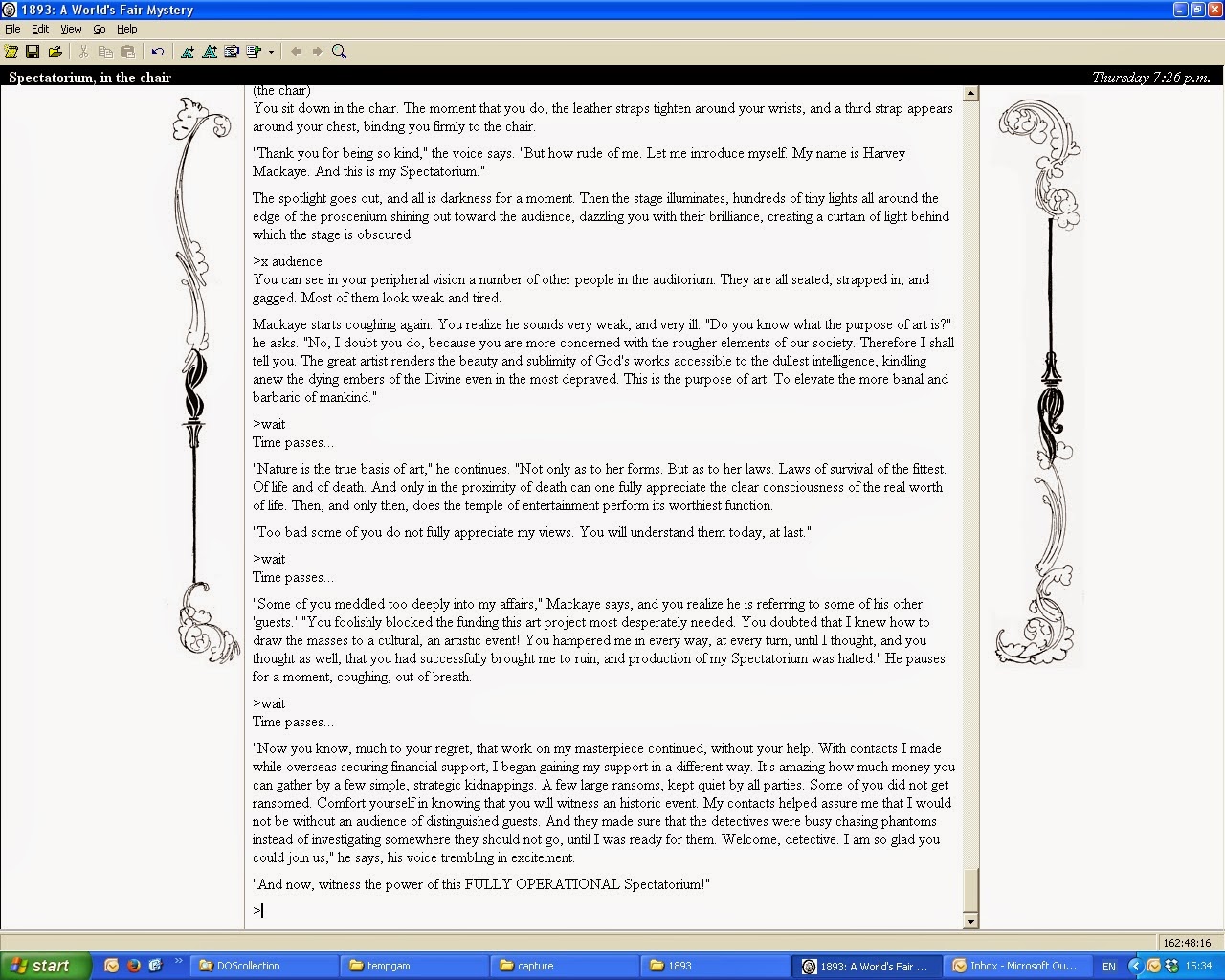 1893: A World's Fair Mystery is a strange breed of game. It's very much a traditional text adventure, but the real-world setting and photos for every location give it an educational air, too. It's never forced down your throat, but you do find yourself wanting to look things up all the time for a bit more info - it may just be me, but I find that whole World's Fair thing fascinating. Apparently there's another one taking place in Milan this year...I'm intrigued! Anyway, back to the game. You're a detective brought in to find 8 diamonds that have been stolen from the show. You're left a note from the perpetrator giving you a riddle about the location of the diamonds and it's down to you to find them. Along the way, you also have to track down a few criminals involved, but they feel almost like a side note to the diamonds themselves (although the aim of the game is to catch the mastermind behind it all). The main character in the game, though, is the exhibition itself. It's a huge space. I tried to do a couple of maps on paper, but both times I rapidly ran out of paper and got in a horrible mapping mess. It is huge. The game gives you a map, and it's the actual map of the exhibition that was given out at the time. As you can imagine from 1893, it's not the most accurate of maps, but it's enough to give you a general idea of locations. What it doesn't give you is any idea what's inside any of the buildings, and the buildings are (you guessed it) huge. Some of them will have 20-odd locations within them, and there are a lot of buildings. Without a map you will be completely lost. After you've been playing for a while you'll have more of an idea of where you are and you'll be able to run around the place at a better speed, but at the beginning it takes a long time to find your feet. There are a few slightly annoying timing issues here as well - you only have a week to catch the criminal, but that should be plenty of time - but, more annoyingly, every day you need to eat three meals a day at set times and get back to bed at set times. It's not so much that the timings themselves are an issue, it's that at the beginning you have absolutely no idea where the places are to eat, so you can spend a long time wandering about trying to find a cafe while the parser is shouting how hungry you are. I don't think it really adds much to the game, and it would have been kinder to the player to just let them focus on the task at hand rather than worrying about the busy-work. Sleeping's not so much of an issue because it's always done in the same place back at your home base. Even there, though, there's a niggling parser issue where the game forces you to sit in your bed before you can sleep, and then makes you stand up before you can leave the room. It's such a tiny thing, but it was a constant irritation every time. But the exhibition itself is wonderful, the photos and the descriptions create a wonderful atmosphere, and sometimes you're left slack-jawed at the amazing stuff that was there. It's hard to imagine something like that taking place now. The puzzle itself is tricky, with a lot of exploration and logic needed to gather the clues and find the gems. It's a toss-up whether it would be better to model something like this in 3D or to have it as a text adventure. Personally, I think this one's better left to the imagination. The game is what it is - a series of puzzles  - it's the setting that really makes this one something special.

Next up on the randometer is...Knightmare! I'm not entirely sure if this is the Konami shooter or the game based on the amazing TV show...guess I'll find out soon enough.
Posted by Binkbenc at 20:24