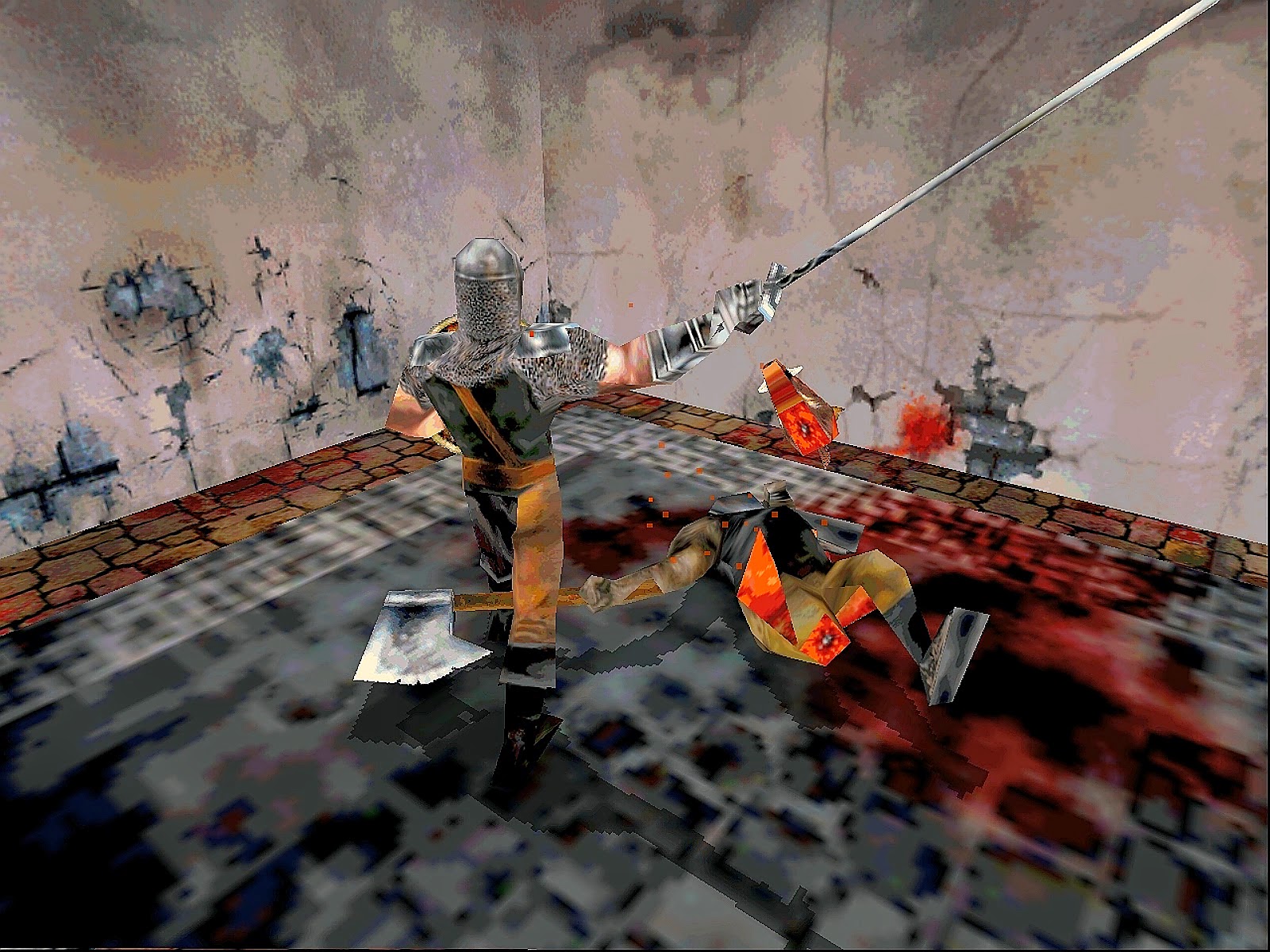 A moment of celebration. I actually managed to finish off not one, but two games last night. Die by the Sword, and the first Marathon. I'm not entirely done with either of them, since SbtS has an expansion pack still to go (Limb from Limb), and Marathon 2 is pretty much the same game as the first - same engine with a few gameplay tweaks and additions - so it feels like I've still got a way to go. I'm almost tempted to play another random game in-between...but no, I'll soldier on.

Die by the Sword is an insanely great forgotten gem. Unfortunately, it's really hard, but other than that it's great fun. It comes across as a fairly standard 3D adventure, a lot of which were doing the rounds in those post-Tomb Raider times, but it comes alive - literally - when you turn on VSIM (which stands for Very Silly Ingenious Mayhem...possibly). In VSIM mode, instead of using the default keys to control your sword swings, you instead use your mouse to control your character's arm. It's a bit of a predecessor to Surgeon Simulator and its ilk. Swing your mouse to the right, and your man swings his sword to the right, and so on. It's a great idea, and once you've mastered it, it does start to make sense. but to begin with it just looks downright crazy. Your guy runs around wildly swinging his sword around like a Mexican jumping bean skewered by a cocktail stick. The whole thing looks hilarious and feels hilarious to play. The developers, Treyarch, obviously realised this - there was no way they were going to be able to have a dour-faced fantasy epic with the main character pogoing around wielding his wibble stick. So what do they do? They create a dour-faced fantasy epic but with the minor edition of brilliant tongue-in-cheek voice acting. Even though it's not really much like him, it reminded me of Matt Berry, so if you can imagine him enthusiastically narrating a sword fight then you're half way there. He even says things like 'ooh, me jewels' when he falls in lava (NB: that may not be exactly what he said...but it was something like that). It's excellent. Coupled with the fact you can actually slice enemies' limbs off and they'll hop after you, swinging away with their one remaining arm, it just lends the whole thing a brilliant air of parody. There's also a 'cuss pack' available where the narrator adds extra fruit to the main character. I think I actually preferred it without - the language was a bit more creative - but it's well worth a download if you're playing the game. I think it's a real shame this kind of control scheme hit a dead end so early, it gives so much more life to the character that just pressing an attack button. Sure, they'd have to work on it a bit so games didn't just turn into a farce, but surely that's what game developers are paid for? There were some almost unforgivable 3D jumping platform sections that almost drove me to despair, but other than that it was a great, fun game. As I say, I've still got the Limb from Limb expansion to go. I think it adds an extra campaign - I couldn't actually see it last night when I tried to start it, but I'll give it a go with a fresh character and see if that works. I've written enough for today, so I'll talk about Marathon when I finish Marathon 2.
Posted by Binkbenc at 16:48