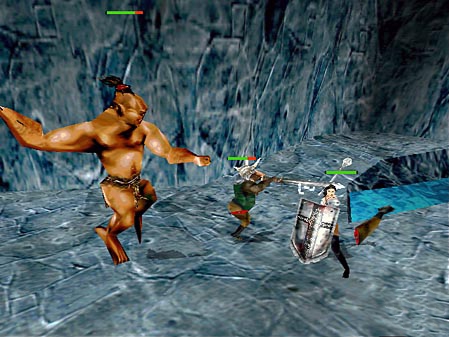 It turns out the Limb from Limb expansion for Die by the Sword wasn't too long. Only 6 areas, I think, and no story to speak of. It's just a series of levels leading up to a fight with a witch and two immortal guardians who you can only defeat once you destroy her and read her magic book. There were a few puzzles, but nothing too taxing - and thankfully no evil jumping puzzles like in the first game (there was that one lava section...but I don't like to talk about that). There also seemed to be a lot more save points, which was nice. The way that the game handles saving is that it autosaves before any trouble spots and usually immediately after them, so you never have to go back and replay long areas of the game. I found it a good and generous system - much better than many other games with badly spaced checkpoint saves. In this game, you play as Maya, the girlfriend of Elric in the first game (was he called Elric, or have I just assumed that because I've been reading about Elric? Anyway...). You can actually choose to play as any character, though, which gives you some idea of how important the story is to this expansion...it's not. Still, the same feeling of fun pervades as you run around trying to get your mace somewhere near the head of that giant horny demon in front of you. It didn't outstay its welcome, and in my books that's always good. Onwards!

The next game on the randometer is... SCARAB! That's not me shouting for joy or anything, it's just a capitalised title. I vaguely remember seeing it in mags back in the day. Mobygames describes it as an 'action/strategy' game, so we'll see how it goes. I should probably try and get through a bit of Marathon 2, too.
Posted by Binkbenc at 12:07