Got my Doge Hat On 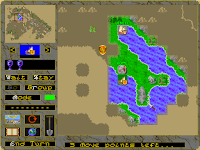 I had a go at Machiavelli: The Prince over the weekend, and I think I'm done with it. I played a short easy game (basically the tutorial from the manual plus a few more turns) and managed to win, so that's good enough for me. I know that playing that level doesn't give me the full experience of the game, but I don't have time for the full game and I'm happy with what I've seen of it. Actually, for all my trepidation, it was a really fun game. I normally find these trading sims a bit impenetrable, but this one had enough of a Civ feel with all the exploration that it kept me hooked. As you can probably imagine, the game involves setting out with your little fleet from Venice, discovering new cities to trade with and setting up lucrative trade routes. As you explore, you discover new cities that deal in different commodities, and try to find the most lucrative routes, balancing length and profit. As you make more money, you can purchase more craft, covering land and sea trade. You can also delve in a bit of politics. My game was so short (and I only played against the computer) that I didn't really get into this much, but you can also do things like bribe senators for influence, become doge, buy cardinals, become pope (!) - which allows you to do things like call a crusade, or excommunicate other cities. You can hire slanderers to badmouth other players, or arsonists to burn down their warehouses. You can raise mercenary armies to attack other cities, or watch in horror as your own cities are ravaged by the Black Death. You can host lavish parties to raise your popularity, or increase the price of indulgences to increase your income from cardinals, being careful not to trigger the Reformation (no, really). There's much more to the game than that, it's a really deep and complex beast, yet felt accessible and fun to play. I can imagine it would be great fun in multiplayer with the right people and an infinite amount of time. As it is, I'm done. Onwards.

Next up on the randometer is...Tear Down the Wall! Never heard of it. Apparently, it's a puzzle game from back in 1990. I'll give it a quick go, but can't imagine it hanging around too long. In other news, it's the Steam Summer Sale, which in previous years I've managed to resist. This year, though, things are different. I foolishly created a wishlist a while back of missing games I have in various series a while back, and Steam has been pinging me with deals on those...some of which are pretty good...even though I blatantly don't need any more games. I am an idiot.
Posted by Binkbenc at 17:12