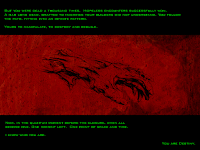 Finally, finally Marathon is finished. I cleared the last level at the weekend. I think my biggest feeling is relief that it's over rather than anything else. The last few levels (especially the final one) were especially painful. There's no big bad guy to defeat at the end of the game, your final mission is to find two key cards and place them in the correct spaces on the level. You don't even have to kill normal bad guys, as you have helpers on the level who will destroy all opposition for you. So, one level, two key cards, no enemies. Easy, right? I think it took me longer than any other level in the game to complete it because the level is so huge, and feels impossible to navigate by memory. I spent ages wandering around trying to find the key cards; ages wandering around trying to find the slots to insert the keycards into; and then ages wandering round after I'd completed everything else just trying to find a terminal I could activate to trigger the end of the game. It just wasn't any fun. It compounded all of my frustrations with the series without sending things off on a high note. Even the story didn't really end that well. The whole thing got more and more cod-philosophical as the game went on, and ended on an oh-so-mysterious note that just wasn't satisfying at all. Oh, except the final word is 'Destiny', which no doubt excited all of the Bungie fans playing their current game (although I have no idea if the stories in them are at all linked). I dunno. I feel like I'm being hard on it. People obviously love the series, and it is a well-produced game...I just spent too long wandering huge empty levels to get any real enjoyment out of it. Sorry Mac-lovers, but Marathon's not for me. I'm very, very glad it's over.

Next up on the series list is the Tintin games. Bit of a weird one, as they're not really related in any way, but I'm going to play through them in order. I've tried a couple of them before and they were pretty awful, so hopefully they won't take too long. I'll probably hit these before I make a start on Machiavelli. I downloaded the manual for it and it scared me, so I'm putting it off as long as possible!
Posted by Binkbenc at 13:24