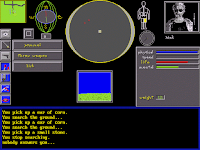 I think I'm done with Defender of Boston. Have I completed the game? No. Have I completed the first mission? No. Have I managed to accomplish anything at all? No. But it's not for want of trying. Actually, I did manage to do one thing. I tore up a t-shirt into strips to make string. That's got to count for something, right? I would actually quite like to play this game - in fact, it's still running in the background as I type this and that's exactly what my character is doing, still running in the background and getting nowhere. It all started off well, it had some interesting character creation with some fun skills. I made some kind of ninja character with high dexterity and ninjitsu, with a smattering of listening and spot checks so I could find hidden things. Straight away, I begun by investigating my surroundings. I found a few items (including the aforementioned t-shirt). I found the long letter giving me my quest and it all sounded quite interesting. I set off out of my house in high spirits and followed the East path at the nearest crossroads. And I walked, and I walked, and I walked. As mentioned, the character is still walking in the background now. He's been walking for about half an hour, following a twisty-turny road that has led to absolutely nowhere. It must have been programmed for a purpose, but I haven't had a single encounter or found a single landmark. Nothing. (I just checked in, and he seems to have swum miles out to sea. I've just turned him around so he heads back to land again.) Emptiness is a problem with many ambitious shareware efforts, but this is just crazy. (Ooh, I've just been attacked by an elk...in the sea...it missed me.) The only injury my character has received so far is when I walked into a table in the dark back in my house. I suppose I could start a new character and head West instead of East, but quite frankly, I can't be bothered. I've seen some people call it a hidden gem online, and there's virtually no data on it, so it would be quite fun to have a decent go at it...but...no. It's time to move on.

Next up on the randometer is...The Reap! It's a shoot-em-up from the late '90s. Apparently from the same guys who've done the recent Super Stardust and Resogun games on the PlayStation. I remember the name from mags at the time, but I don't think I've ever played it. Should be a nice change of pace.

Hmmm...small problem. Turns out it's an old Windows game, and it's not going to run on my new 64-bit system. Hope that's not going to be too much of a problem with Win games! Oh well, onwards! Next up on the randometer is...Joust! Yep, that Joust from 1982 with the knights on ostriches. Should be a quick one. I'll load it up tomorrow.
Posted by Binkbenc at 21:40