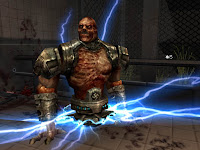 I finally finished off Heinrich I, the big bad guy from RtCW at lunch today. I kept hanging back trying to pick him off from a distance and kept getting absolutely murdered by flying ghosts. I ended up checking a walkthrough to get some tips to defeat him because I was dying in seconds every go. Turns out all I had to do was get on the platform that he was standing on and then no ghosts appeared. With that craziness out of the way, he was pretty easy. That kind of ties in with the way that I like to play these games. I'm a complete FPS coward. I much prefer to stay as far away as possible with a sniper rifle to getting up close and personal with baddies. Of course, 9 times out of 10 that's impossible and games force you in close (just like here), but I'll still do my darnedest to run away and snipe. I'm rubbish. Luckily, RtCW has quite a few stealth/sniper sections interspersed with all the close quarters fighting, and those were definitely my favourite parts of the game. I really enjoyed areas like the French town where you had to sneak through the streets silently disposing of the enemy and taking out 5 key Nazi targets, That was a great level for me. I also liked the missions where you were parachuted in at a distance and had to make your way closer to a base, enabling you to pick off targets quietly before entering the building. All good. I didn't much like the paranormal levels, though, where you were going toe to toe with various undead and mostly consisted of wildly strafing and firing as many guns as possible (and often running out of ammo!). Still, all in all, it was a very enjoyable game. Some decent variety in the missions (including a hateful timed one, grrr), some fun locations (though some were a bit too dark for my old eyes), and decent weapons (the silent sniper rifle will always be my favourite, though I quite liked the satisfyingly inaccurate rocket launcher). It was quite old school, but then I'm an old school guy so it gets a big thumbs up from me. I don't have the most recent Wolfenstein. game, so this marks the end of the series for me. It's been quite a fun one to play through, having three distinct eras of games so far apart, but thematically feeling quite...I was going to say coherent, but that's not quite true. It's evolved coherently, but there isn't much linking the original game to the latest one - the first was quite a gritty prison break out (and in again), whereas the last is a gung-ho blastathon with a paranormal edge. Still, Nazis. Nazis keep it all together.

Next up on the series list is the Tomb Raider games. This is definitely one I've been looking forward to. The original Tomb Raider was such an amazing game at the time. I played it for ages (and the boxed copy is just on the shelf behind me), and I've played through a few others in the series, too. Turns out I have 11 Tomb Raider games (not including the ones on handheld), so I'll be at it for a while! I'll try and hit Amnesia first, though. Maybe get that out of the way tomorrow.
Posted by Binkbenc at 14:28