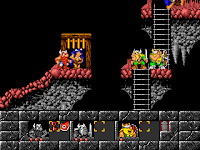 I can't do it. I just can't. My blood pressure's rising just thinking about it. The Lost Vikings is one of the most frustrating experiences ever. There's nothing inherently wrong with the design of the game - you have to guide your three vikings through the levels using each of their unique abilities, and the puzzle aspects of the levels themselves are fine. It's just so darned unforgiving. The slightest error and one of your guys will die...and if one of them dies then it's game over. Actually, that's not quite true, if one of your guys dies then the game allows you to carry on playing with the other two, but it's impossible to move on to the next level if you don't finish it with all three, so it's utterly, utterly pointless. Thanks, game. Along with the instant death at every opportunity, you also have to deal with every animation happening a little bit too slowly. Baleog with the bow fires too slowly, so you'll die. All of them recover from their moves too slowly, so you'll die. The switch between vikings happens too slowly, so you'll die. And don't forget, when you die you have to go right back to the beginning of the level and start again...and then you'll just dies in a different part of the level...probably earlier than you did before. It's all so, so frustrating. I played through 15 levels, and that was quite enough. I think there are 35-40ish in the whole game (going by the number of worlds), so I got almost halfway through and I consider that a great achievement! Could I get further through the game by brute-forcing every level? Probably, yes. Do I want to? No, no, no and no. I can kind of imagine it might be a bit more fun multiplayer, but that would come with its own problems. So, it's off to Valhalla with the Lost Vikings. Onwards!

Next up on the randometer is...Amnesia! No, not the recent one, apparently it's a 1986 text adventure featuring 4000 locations across Manhattan. Can't say I'm looking forward to that much! I'll play through a bit more Wolfenstein first. I've got through a few levels and it's pretty good fun so far.
Posted by Binkbenc at 18:24