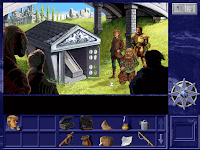 I finished up Shannara over lunch today. There wasn't much left for me to do after my last session, just get through the Hall of the Kings, defeat the big bad (book) and watch the ending. It's a bit of a strange old game, developed by Legend Entertainment (they of the Spellcasting games, and many others - strangely enough, the randometer has thrown up quite a lot of their games, so I've played a good chunk of their catalogue). Legend began life as a text adventure shop, and it shows with Shannara. There are overland sections that don't really do much, and combat sequences that don't really do much, but the heart of the game is in the adventure sections and that's where it shines. I don't know if Terry Brooks had any hand in the dialogue and descriptions, or if it was left to the hands of the Legend crew, but you can tell it was written by someone who knew what they were doing. Even though the story follows some strong fantasy tropes (uniting disparate tribes to reforge a broken sword and defeat the big bad), it does it in some entertaining and sometimes surprising ways. The game also includes (if I'm not spoiling it too much) the only party character death that I can think of where you have to actually kill the party member yourself. It's quite a powerful sequence where you have to kill your closest friend (who you had a bit of a crush on) in order to save their soul and free them from becoming a slave to the big bad. It's particularly galling as you've just come from a town of healers, but there's no way back to them in time. I've no idea if there is any way to prevent her dying, but I couldn't find it. The rest of the game is a fairly standard but well balanced graphic adventure with an extra dollop of character conversations. I don't remember how far we got in it before. I don't remember seeing the ending before, but some of the other sections evoked very strong memories, so I know I played through some of it. There was the odd bit of head scratching and poking around the screen for the tiny group of pixels you needed to click to move onwards, but it was generally pretty straight forward. I don't know if this game was based on any of the books or if it stood alone - I remember reading a few of them at school, but can't remember what happened in them at all. Over all, it was a pretty fun adventure, and fun to see it through to the end.

Next up on the randometer is...Jones in the Fast Lane! Oh blimey - I remember this one well. It was one of the many dodgy games my friend's Dad got from Bahrain back at school. It's essentially a computer board game, but playing through your character's life. We played it quite a lot in the day, and found it the weirdist thing ever (I also remember not liking it much at all!). Ah well, I think it'll be a quick one anyway.
Posted by Binkbenc at 14:37