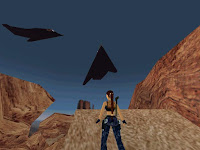 Yep, I'm keeping that title going. Finally polished off Tomb Raider 3 last night. I don't really have much to say about it. It was a slog, that's for sure. It's very much treading the same ground as TR2 with a few new features. The ability to pick which area you wanted to go to next was a bit random really, and only served to take even more focus away from the story. It also didn't help that although they had movies at the end of some levels, they very rarely had them at the beginning - which is often when you really need them. It meant most of the time I didn't really have a clue what my goal was for the level other than: Get to the end. It's a shame, because I actually think a good yarn is critical to the Tomb Raider series; it's what keeps you invested when your completely lost and the puzzles are doing your head in (which happens frequently in these games). Other than that, it sticks very closely to the TR template - you jump around, you shoot things, you fall into a multitude of spike traps. That's not to say I didn't like it - I still really enjoy the grand vistas, and the thrill of reaching a new area and gazing around to see how the heck you're going to get from A to B. I don't think some of the environments were as good in this one - there's a lot of indoor stuff that I don't find as fun as the caverns and huge outdoor areas, but also some good stuff. I really liked the outdoor temple area and the huge valley, but I didn't really like the prison section or the mining bit. There seemed to be a lot more frustrating pain points in this one as well. I think I finished with almost 600 saves - I don't know how console people did it with the limited saves they had. My overriding feeling, though, is that it did go on forever and all of the levels kind of blurred into one after a while. Not that I'm feeling Tomb-Raidered out quite yet!

Next up is The Last Revelation. I actually had this one on the Dreamcast, so I've played a little of it, but I don't remember getting too far. It's the one where you start out as a young Lara learning the ropes (quite literally - rope-swinging is one of the new features). I'm still slowly going through the First Templar. It's quite fun, but feels like it might take a while. In other news, I've been playing through some of the Lego games at the weekends with Max on the Steam Link. We've just finished the Marvel game and have started the Lego Movie one. We just rushed through the story, as that's all Max wants to do, but the crazy completionist in me wants to unlock everything it has to offer, so I'm not going to count it as complete yet.
Posted by Binkbenc at 10:41