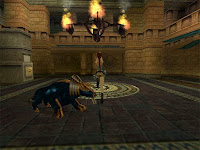 Not even I could stretch as far as Fourmb Raidered. Anyway, after a bit of concerted play I finished Tomb Raider: The Last Revelation last night. It was a bit of an odd one. After the crazy continent hopping of the last game, they obviously took a bit of criticism on board and decided to bring this game back to its roots. It's a full on - Egypt-centric - all in tombs, traditional game. It sounds like exactly what I wanted...but it didn't quite hit the right notes. First up, the locations are all very samey, and the palette is very dark brown throughout. Also, this game is the first Tomb Raider that instead of having discrete levels, this one has you move back and forth between levels and solve puzzles that have requirements in different parts of different levels. This made it really hard to get around, as you're never quite sure if you've done enough to move on or if there's still more to do in that part of a level. You also find items that you never know if you'll need them in a later level (or an earlier one) so you're not sure whether you should be searching for places to use keys, for example, or if you don't need them yet. It made the completionist part of me very nervous! I also found the story a bit weird. The storytelling itself is fine, with some great videos and some new swooping camera animations as you enter new areas, but it seemed to give up towards the end. It was almost like there was a lot more story but they ran out of time (and it's already a long game), so they just decided to cut it off. So, SPOILERS, as far as I could tell your buddy/mentor/nemesis Von Croy gets possessed by the spirit of Set and you have to find the armour of Horus to awake him so he can destroy Set. You go through the game collecting the armour and at the end of the game you put it on Horus. Then...I'm not quite sure what happened. Horus went a bit crazy and started attacking me. I escaped him then the pyramid started to collapse, I just made it to the exit and Von Croy was there...seemingly no longer possessed...he tried to help me, but the temple collapsed and that was that, the game ended. The next game, Chronicles, begins with the assumption that Lara is dead. So, all a bit strange. Maybe things are explained in the next game? Gameplay-wise it was mostly fine - the good old Tomb Raider formula still isn't boring and I enjoyed trying to solve some of the puzzles. I do find myself saving after pretty much every jump at times, though. The balance of enemies was probably about right. There were a lot of them, but they never seemed overwhelming, as they have in previous games. There weren't really any boss fights in this one, either, which I actually kind of missed. There are numerous big evil baddies, but you mostly have to figure out a way around them rather than directly fighting them. I'm glad it's over, though, and I'm ready to move on to the next game in the series - Chronicles. I'll probably try and get through Enclave first, or at least one side of the campaign.

In other news, the PSN cull continues. This time it's Echochrome that's consigned to the Done pile. It's actually a really nice puzzle game. You control a walking artist's doll (one of those posable wooden ones you use for figure drawing) and you have to rotate the world to get the doll from the start to the exit. The gimmick is that your character is only affected by what you can see. So, say there's a pit in the middle of his path. Normally he'd fall down it, but if you can rotate the world in such a way that another part of the level obstructs the pit then it ceases to exist and he can happily walk along that path. Same goes for joining different paths together. It must have been a nightmare to code, but it works really well. But...I just haven't got time for it at the moment, so off it goes. Maybe one day in future I'll come back to it.
Posted by Binkbenc at 17:24