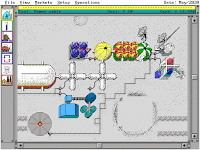 As far as I can tell, Moonbase is essentially Sim City in space. It feels the same, and is modeled very closely on it, but without a manual, I was essentially flying blind. You start with a very basic lunar landscape (grey with a few craters) and can place down a variety of buildings - from things like housing and power plants to hotels and entertainment centres for space tourists. You also need to put down roads and powerlines, etc. Buildings have airlocks and power couplings randomly distributed around them. It probably showed them in the manual, but I had to (rather expensively) put a building down to see where all its connectors were, then bulldoze it and place it properly. There was also some kind of rudimentary economy that I could never quite get the hang of. You could send out mining drones to harvest oxygen and nitrogen, but I couldn't work out how you were supposed to trade it (maybe it just happened automatically?). It also took me a while to realise that you have to put down a landing pad if you actually want anyone to visit. So, I think it would have been a lot more interesting with the manual, but otherwise it just felt like a less-friendly version of Sim City. Onwards!

Next up on the randometer is...Night Shift! I vaguely remember this one from magazines back in the day. It was a kind of puzzly thing from Lucasfilm. Interesting to see what it's like.

UPDATE - Night Shift needs a code wheel to get into the game, and there's nothing obvious on the internet. I don't think I've got the will to print off and painstakingly cut out my own, so I'm going to move on. Next up on the randometer is...Fist Puncher! It's a modern 2D scrolling beat-em-up. Hopefully fun.

In other news, the great early PSN game purge continues. I'm going to move Super Puzzle Fighter Turbo HD Remix into the done pile. It's similar in style to Tetris/match 3 games where coloured gems (in pairs) drop from the top of the screen and you have to line them up with the rapidly expanding pile of blocks at the bottom of your screen. The difference here is that gems of the same colour merge together into huge gems, then you can burst them (using a differently shaped detonator block that randomly drops as part of the normal gem pairs) to 'attack' your opponent and send a bunch of harder to destroy gems over onto their play field. It's a fun game, but a) it's a score attack game, and b) I'm rubbish at it, so I'm going to move on.
Posted by Binkbenc at 15:24