And...that lasted about as long as I thought it would. First, credit to Edward Grabowski's The Blue & The Gray for being detailed and quite nicely presented, but minus points all the way for everything else. I'm not a big grognard, and if I was going to pick a war then the American civil war would probably be bottom of the pile. There's just not much here to interest me. It's also crazily overwhelming to a beginner. It's not like, say, an RTS where you start with one unit and build from there. In this game you begin with an absolute tonne of units spread across the entire US, with your opponents having the same. It might be historically accurate, but it's a huge slog trying to go through all of your units and micro-managing them. In the end, I just decided to focus on a core group of 5 units and let the others fend for themselves. It took me about ten turns to actually get my troops anywhere near the enemy (and those turns were soooo slooow), and even then the enemy kept running away. When I finally managed to engage them, they just out-and-out slaughtered me in a matter of seconds. Great. Obviously, I didn't play it in the manner it should be played, but even so, it's probably one of the least welcoming games I've played. Anyway, there we go, onwards!

Next up on the randometer is...Knights of Pen and Paper! I actually played quite a bit of this a while back. No idea how long the game actually is, but it'll be fun to get back into it.
Posted by Binkbenc at 21:26 No comments:

Well that was quick and easy! The Secret of Serpent Creek was a fairly typical hidden object game, and much easier than the only other one I've played previously. The hidden object sections themselves are framed in a light graphic adventure-style story where you have to move between locations looking for clues and solving other puzzles. None of the other puzzles were particularly difficult, and certainly nothing you couldn't just brute force your way through. I'm not really sure if there is a fail state for these kinds of casual games, you just keep plugging away until it's done. It was perfectly fine for what it was, and made a nice diversion from the slog of Enclave, but it really wasn't much more than a pleasant diversion.

Next up on the randometer is...Edward Grabowski's The Blue & The Gray! Ugh! It's an early war game set in the American civil war. Pretty much the kind of thing I was least looking forward to. I'll give it a quick go tonight, but I can't imagine it's going to be a keeper.
Posted by Binkbenc at 14:47 No comments: 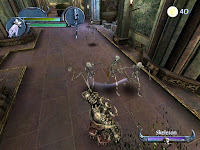 I decided to try and break through Enclave, so powered through it in any spare time I had over the weekend and last night, and polished off the last level in my lunch break today. There's nothing wrong with Enclave per se, it's just exceedingly, well...average. It's quite pretty, but also a bit dull and generic. The combat can be exciting, but it's also a formulaic click-fest. The levels are a good length with a few secrets, but they're also one-dimensional and a bit boring. For every good there's a bad, and it just evens out into a very mediocre, faintly boring game. That's perhaps being a bit harsh, but the biggest criticism is that there's just no variety. It's all running at the nearest enemy, clicking wildly until it's dead, then going on to find the next enemy. Yes, you might need to use a health potion every now and then, and if you're a magic user then you might need to back off until your energy has recharged, but there's no real strategy to the combat, and enemies don't show any other behaviour except firing at you from a distance or charging in and hacking you at close range. And on the flip-side, those are the only options available to you, too. Sure, there are a bunch of characters available across the two campaigns, but they essentially all boil down to the same thing. The dark campaign is essentially a mirror of the light campaign with the same character archetypes with a slightly more sinister twist...instead of a human knight, there's an orc berserker, and so on. The main story was vaguely interesting, but didn't really go anywhere and ended on a cliff-hanger for the next game...which obviously didn't happen. So, it started off fun in parts, but really I was done after the light campaign, and the dark campaign was just a slog through the same old thing. In the end, I'm very glad it's over and I'm ready to move on, which is never the sign of a great game. Ah well, onwards!

Next up on the randometer is...9 Clues: The Secret of Serpent Creek! It's a hidden object game, so about as far from Enclave as possible. Should be a nice break. I'll also try and play through a bit of Tomb Raider. I did make a start on the first level, but when I went back to it my save game had disappeared so it looks like I'll have to start from scratch anyway.
Posted by Binkbenc at 16:12 No comments: 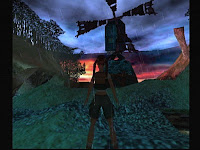 It's been a long while since a post, so sorry about that. Lots of reasons - work changes, life changes and, of course, playing through a long couple of games, but I finally finished Tomb Raider Chronicles last night. I actually really enjoyed the game side of Chronicles. The previous game was a bit of a slog, but this one felt much fresher and slightly more light-hearted (and being a bit shorter certainly didn't hurt). The framing story is that Lara is believed dead from the end of the last game, and her friends have gathered to reminisce and swap stories about Lara's greatest adventures, and those are the adventures that you play. There are four separate stories, and each of those is split into about 3 levels. It made everything feel a lot more compact and manageable and kept the pace up. It also lent the game a bit more variety with different locations and different time periods. It was one of the most fun Tomb Raiders for a while. I particularly liked the Lara-does-horror Ireland section, which was a nice change from the norm. The actual framing story didn't really go anywhere, though, with Lara starting off presumed dead, and ending up...presumed dead, with Von Croy finding her backpack and proclaiming that he'd found her. We'll have to see how the next game goes. Next in the TR series is The Angel of Darkness, which was the last of the Core Design games, and the last we saw of Lara for a while. They gave Lara a slightly more gothy edge (as was strangely popular at the time) and added another playable character. It was apparently rushed to release and was a bit buggy, and I remember it getting terrible reviews at the time, I'm looking forward to it with mixed emotions. From the first level that I had a quick go at it looks like they've messed with the control scheme a bit, and it feels a lot slower than the normally fluid Lara that I'm used to. Ah well, I'll see how it goes.

I've also been slowly playing Enclave alongside Chronicles. I've finished the Light campaign and made a start on the Dark one. It's a bit samey, but I'll continue playing through it. Looking forward to finishing it and starting a new game, though.
Posted by Binkbenc at 12:37 No comments: