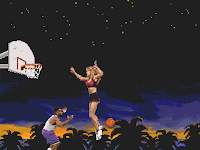 Well, that was absolutely and categorically terrible. I can't even see that it would be that good in multiplayer, which is most sports games saving grace in my book. The graphics and animation are shoddy, the controls are shoddy, the slidy jumping is shoddy, the awful digitized speech is showoddy shoddy. Even the 'so-bad-it's-good' factor only lasts about 5 seconds while you laugh at the (three) characters before you again become depressed about how bad it is. That bit would probably be funnier with friends - you might even get 10 seconds of joint mockery - but the actual game itself would still be dire. I can't think of a single good thing to say about. There were better basketball games years before it, heck, sports games like Match Day on the Beeb were much better than this. Ah well, to the bin it goes. Onwards!

Next up on the randometer is...Trial By Magic! Never heard of it. Another '90s game, this time an action RPG. ... And it doesn't work. Some kind of crazy error. Not something I think I can fix. Ah well. Next up is...Divekick! Okay, that's quite a recent fighting game - the twist being you only have two buttons: dive and kick. Be interesting to see what this one's like.
Posted by Binkbenc at 21:44