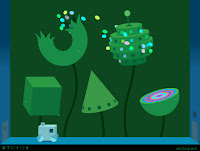 So, a verrrry slow gaming life recently. New job and a lot going on means I haven't touched a game in the last month or so. I haven't started the next Tomb Raider yet, and I'm about a third of the way through the massive game that is Inquisitor, so I wanted something small and quick that I could nibble on. Windosill was the perfect thing. It's a game that can be completed in about 20 minutes. I don't know if it was a Flash game first (I know it was on iPhones, so maybe not), but that's what it feels like - a vector puzzle game with things that do stuff when you click on them. Essentially, you have to get a car through all of the levels, and to do that you need to find the cube key for the door. It's usually a simple case of clicking on everything until the key pops out, but some levels (screens is perhaps a better word) have a little more strategy to them, such as arranging the parts of a machine or distracting a creature so your car can get past. It's all very simple, but also very pleasing. Reminded me a little of the Amanita Designs games, but on a much simpler level.Just what I needed. I might keep nibbling at little games like this whilst I chip away at Inquisitor. Onwards! Next up on the randometer is...SoulTrap! Never heard of it, but it looks like a '90s platformer, so will hopefully be another one I can zip through.

...aaaannndd it's 16-bit Windows only, so no joy for me. I hope this isn't going to be a problem for games I actually want to play! I guess I can try and set up a Virtual Box or something with an image of Win 95? Anyway. this one didn't look that fun on YouTube, so I'm not that bothered about skipping it. Next up on the randometer is...Jammit! Never heard of this one either. Apparently it's a basketball game, so I might just give it a quick go now tonight. A similar kind of mid-90s age, so hopefully we won't hit the same problem.
Posted by Binkbenc at 14:27