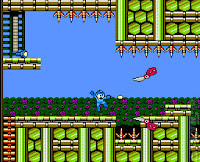 So I actually played Mega Man 9 at the weekend, but I couldn't let a title pun like that go unused. Mega Man 9 was the next in my trawl through the PSN titles that I acquired many moons ago. I don't have a great history with the Mega Man series, and I'm afraid this one didn't really suit me either. It's a hard-as-nails retro love letter to the old Mega Man games of the NES era, but I didn't enjoy it at all. I just don't have the skills (if it's even possible) to get through the levels on my first few attempts, and I don't have the time (or the patience) to learn where all of the traps are so I can actually make it through them. By all accounts the game can be completely fairly quickly once you know how to beat every level, but I reckon you'd have to mainline only this game for months to be able to do that, and that's just not something I want to do. So, off it goes to the great digital junk pile in the sky. The next PS3 game is The Last Guy, which I've had a quick go at before, years ago. I'll see how long it lasts me.

In other news, I also finished Plantera! Where did that come from, I hear you gasp! Well, it's a fairly recent game that I picked up in a bundle earlier in the week. It's one of those'Clicker' games that I hadn't tried before (or dared try because of my terribly addictive personality). Anyway, there's nothing really to the game, you just keep on buying and upgrading plants and animals to produce more crops and earn more money, ad infinitum. There's actually very little content to it, so you'll have seen all there is to see after an hour or two. After that, it's just a question of letting it run in the background (or not - you still earn money even when your computer's turned off, you just earn it quicker if it's running in the background) until you've racked up enough money to buy enough of everything to earn the last few achievements. I managed that today, so there's nothing really left to go back to (sadly, my garden's still running away in the background as I type this...I can't bring myself to turn it off). So, a few hours addictive fun; I couldn't ask for more from a 'free' game in a bundle.
Posted by Binkbenc at 17:35