The Pixels of Pen and Paper 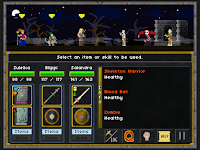 I think I'm about done with Pixel Heroes. It reminded me a lot of Knights of Pen and Paper - a pixel aesthetic and irreverent sense of humour, showing promise in the first few goes, but rapidly losing interest later. They are fundamentally very similar games, too - party-based 'RPGs' that consist purely of traveling from place to place and having turn-based fights both along the way, and when you get there. In both games, everything just takes a little bit too long and becomes repetitive much too quickly. There's also very little strategy or evolution, you'll see what the game has to offer very quickly, and there's nothing left but the long slog to finish the campaign.There's more I could do, achievements I could get, but I just don't have the heart. It'd mean playing through the entire game again but with different characters - except the characters aren't really that different. They have different abilities, but the abilities all essentially do one of the same few things - damage, healing, or status ailments. All characters can use the same weapons and armour, and none of them are particularly noteworthy. They have funny names, which makes it interesting seeing new ones for the first five minutes, until you start seeing the same sets of names over again. Perhaps I'm being a bit uncharitable, perhaps it would have been much more fun on a phone where you might have only fought one or two battles a day on your daily commute, but when playing it straight on a PC it becomes tedious very quickly. A shame really, but there we go. Onwards!

Next up on the randometer is...Quarterstaff: Tomb of Setmoth! Apparently it was the first RPG for the Mac, back in '87. Interesting to see how it's held up. ... And I've actually got the Mac version, so that's not going to go very far. I thought I had the PC release, but doesn't look like that's the case. I could try grabbing a Mac emulator...but...no. So, next up on the randometer is...B-17 Flying Fortress! I'm rubbish at flight sims, so can't see this one lasting too long, but I remember the ads well from mags back in the day, so interested to see how the game plays.
Posted by Binkbenc at 21:27