Yeah...about Energie Manager...I'm not going to be playing that for much longer. Some half-remembered A-level German will only get me so far. The first game didn't go well at all, I blew all my funds on a posh place in Frankfurt and the bank called in my loan the next month. Second game went a bit better. This time I bought a little dive in Bonn and fitted it out with some cheap toilets and tables. 1 cook and a couple of waiters later and I was on my way. I'm not really sure how the eco aspect comes into it. As far as I can tell, it seemed to be saying that eco stuff is really expensive, so you've got to start with all of the worst fittings before you can upgrade to the stuff that's good for the environment...not really the best message to teach people. The exception seems to be that you can get a delivery bike for cheap and it's much greener than the other options. Of course...you're much better off getting a knackered old estate car and running tons of orders around the city in that. I'm sure it does all make a lot more sense if you're German and into hardcore management sims...but...meh.

Next up on the randometer is...Mars: War Logs. Ooh, a fairly recenty RPGy thingy. Could be fun.
Posted by Binkbenc at 21:18 No comments:

Super 3D Noah's Ark is done!And what do you know, I actually really enjoyed it. It's a Wolfenstein-era shooter, but somehow this one seems to have aged better than Wolf3D. I think that's partly because it's a later game so had a (marginally) higher resolution, but also because Wolf3D has been superseded by hundreds of other shooters, but there's nothing quite like S3DNA. Sure, it's just a gimmicky reskin, but that completely changes the feel of the game. You're no longer the destroyer of worlds, now you're here to feed the animals and put them to sleep. And that music! Is there anything else so maddeningly jolly? It pulls you bouncing along through the game, accompanying every pop of your catapult and snore of an animal. It was a complete unexpected joy. I don't remember the SNES version having the same feeling at all. Nice and quick, too - I couldn't ask for more.

I'm also really enjoying Fallout Tactics without really expecting to, so two thumbs up for gaming at the moment! Next up on the randometer is...Energie-Manager! Ugh! Apparently it's a German eco-restaurant management game released for free to teach kids about the environment. Hmm. I might not spend long with this one.
Posted by Binkbenc at 16:41 No comments: 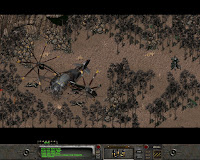 Fallout 2 is done and dusted. It's a very similar game to the first one in a lot of ways. The engine, interface and graphics are very similar, and the world and lore are direct extensions of the first game (it's set 80 years in the future in pretty much the same area of America), and it's fantastic. Without the time limit of the first game you feel like the pressure's been lifted from you a bit, and you're free to explore the wasteland a bit more. There is a main quest with an initial sense of urgency, but, um (spoilers) it turns out to be not that urgent. This is good, because the world is huge. I have to admit, toward the end I even started rushing the last sections a bit because once I'd accessed the final area I just wanted to push through to the end rather than doing my usual explore every inch of the world trick. I think this was for a couple of reasons, first up, I'm really keen to get on to Fallout 3 and explore that world, so I was kind of mentally rushing through it, and secondly, I was playing a modded version that adds in all of the content that was cut from the original release. This is a good thing in that some of the content is great, but it does make a long game even longer, and sometimes there's a reason behind why things were cut. I need to stress, though, that I wasn't rushing because I wasn't enjoying it - I loved the game, I'm just keen to get through a bit more of my backlist. The star of the show is the world - it's such a great place to explore, with some wonderful locations and characters, and there are plenty of little sidequests that add to the flavour. There's also a lot of lore added in this game that builds on the first game, so you finally understand a bit more about the true story behind the vaults. I have to admit that I don't think the overarching story worked quite as well as the first game - that may be because there is so much else to do that the main quest falls by the wayside a bit, but honestly, if it wasn't for the odd dream every now and then (in game!) reminding me that there was a main quest, then I could have quite happily forgotten about it and just wandered the wastes. I think the other problem with the main storyline is that it doesn't really have a middle. This is quite a common problem with RPGs, but it was really keenly felt here. The first section is quite story-full and involving, then there's just a long section of exploration and sidequests where the main story takes a complete back seat, and then suddenly there's a massive rush of exposition as you barrel toward the end. The thing is, it's not like that's just my completionist choice to spend ages doing the sidequests in the mid game - you have to do them or there's no way your character will be ready for the endgame. They're a canon part of the quest, they're just completely separate to the main story. I've spent a lot of words on it, but really it's a minor quibble in an excellent game. One gripe I did have was that I found the end really hard. Firstly, there was a frustrating section where I was meant to blow up a reactor. I spent ages setting dynamite and reloading the game trying to get the dynamite to blow up to completely no avail, and I got so annoyed and stuck that I checked YouTube to see what I was supposed to do. Turns out I was actually supposed to destroy a computer in the room next door, not the reactor itself. Grrr. Anyway, at least that was easy once I'd learnt how to do it,.. Unlike the final battle. The final battle just comes out of nowhere. It's the only real boss fight that I remember having at all in the game, and it was incredibly hard. Maybe I just did it wrong, but I got slaughtered time after time. I don't know how I finally did it in the end, but I finally did, and let the credits roll. A thoroughly enjoyable game, and will probably be one of my games of the year.

Next up is Fallout Tactics: Brotherhood of Steel. This is kind of the black sheep of the Fallout family, and I knew very little about it before this. I have to admit, I've done the first mission now and I'm loving it. Really looking forward to seeing where it goes. I don't think the single player campaign is that long, but we'll see. Also still plugging away at Noah's Ark. I'm enjoying that more than I thought I would, too.
Posted by Binkbenc at 20:49 No comments: