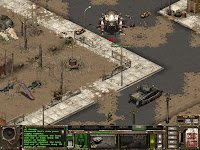 I actually finished Fallout Tactics a week and a half ago, and have since been playing Fallout 3, erasing all memories of Fallout Tactics in the process. That'll learn me for not writing this earlier! Think, Ben, think.....so, Fallout Tactics is kind of the black sheep of the Fallout family, and one that I'd heard very little of and never played before. I went into it with slight trepidation - Fallout is a great RPG series because of the story, what would happen when they stripped out that story and replaced it with just a combat engine? Well, surprisingly, it's not that bad at all - in fact, I really enjoyed it. In some senses, you could probably say it wasn't a true Fallout game, and I don't think it really was, it's more of a stop-gap while they were making the original Fallout 3 - Van Buren. It's more about showcasing the new real-time engine, and what it could do. In that respect, I think it passed with flying colours. The combat was  immediately more satisfying. You can play it in the same turn-based style as the original Fallout, but the real magic comes in the realtime combat, taking your team into battle against varied opponents and setting them up just-so, with your sniper on the high ground surveying the wasteland and your tank wading in with a medic in close support. The weapons and skills are all very familiar - as is the setting - but the new engine is hugely fun, feeling a bit like Commandos, or one of those more stealthy tactical games. There is a campaign  - not hugely long, but satisfying. The story isn't really developed that well, with very thinly characterized NPCs and side quests that don't really go anywhere, but it's enough to hang the main campaign together and keep you pushing on.

I do recommend it even now for its tactical gameplay. I think it holds up with some of the other games I've played. I want to compare it to Jagged Alliance, but I've never played a JA game (yet), so I can't really do that! As I mentioned at the beginning, I've since moved on to Fallout 3, and that game's already got its hooks in me. I will just say, though, that the darn thing was a right pig to get working under Windows 10. Not fun at all. It still crashes regularly, too, which is making playing through it a little frustrating. In the meantime, I am giving Mars War Logs a bit of attention, but Fallout's definitely stealing the majority of my time.

Oh, I also tried my hand at another PS3 game and consigned it to the pile of dead games. I didn't come anywhere near completing it, but I played through a couple of levels and feel like I've seen all it's going to offer. What is it? Oh - The Last Guy. It's a little like a combination of Snake and Pac-Man. You move around a maze (okay, it's photo-realistic real world locations, but it's still essentially a simple maze) and avoid the evils who are also moving around the maze. Your task is to rescue all of the people on the map (reduced to dots) and bring them back to a safe zone. As you collect more people they stretch out in a line behind you, making you more vulnerable to evil attacks. See - Pac-Man mixed with Snake. There are a few other elements thrown in - power-ups, walls blocking your way that you need a certain size line to open, different types of enemy, and so on, but essentially I've seen all there is to see. All I'm doing now is unlocking more maps. It was good fun, and I probably could have played it for longer, but life's too short. Onwards!
Posted by Binkbenc at 22:11