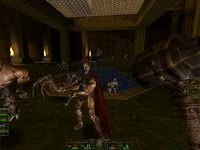 It turns out that Daikatana is nowhere near as bad as its reputation suggests. How could it be? But that's not to say it's a great game. Even I remember the amount of hype it had back then, and something that puffed up was only ever going to burst spectacularly. The problem begins with the first level. It's a terrible level. If they'd cut the entire first section and began the game with the second, it would have been much better for it. The enemies are evil and irritating - flies that buzz around your head, and frogs that jump along the floor - small, difficult to hit, and capable of dealing a lot of damage. Worse than that, the first weapon that you have fires bullets that bounce directly back off walls and hit you. So, if you miss an enemy, you're likely to hit yourself with your own fire. The first few games that I played resulted in me rarely getting out of the first area - I just couldn't get anywhere without dying. There were also numerous bugs causing me to get stuck in scenery and unable to carry on. I was all ready to quit on that first level and agree that it was in fact the worst game ever, but instead I went looking for patches. There's a community patch that improves the graphics, tidies up the level geometry - meaning less getting stuck in scenery, and removes some of those flies from the first level (amongst many other things). Honestly, it's a life saver - I can't thank the creators of it enough. It makes Daikatana a playable and - once you're off the first level - decent game. The time travel gimmick is a decent one in a game like this, providing a lot more variety to the levels and creating some really interesting spaces. There are a whole set of new enemies and weapons for each time period, which was a huge thing at the time, where most shooters were still confined to brown corridors with a few rote enemies (that's not to say that Daikatana is completely free from brown corridors, mind). You have two sidekicks who accompany you on and off throughout the story and help in firefights. For what it's worth, there's also a story - a bit too heavy on the long expository monologues, but still more than we ever had in Quake and its ilk. Unfortunately, even with the patch it's still not all peaches and cream. There are some fundamental design issues that stop Daikatana from being a great game. Let's start with the weapons. I mentioned that every has a full compliment of 8 or so unique weapons, so how many of those did I use? One. After the first section, you gain access to the Daikatana of the title, a powerful sword that gains more power the more people it kills. So, it's obvious that you're going to use the Daikatana because you want it to become more powerful. This is encouraged by the game - at the end of every level, you're given a read-out of the sword's current power level and how much you need to reach its final form. There were a couple of flying enemies that I used missile weapons on, but the rest all fell to the sword. All the rest of those weapons available to me? Pointless. Actually, that's not quite true - the big bad end of game guy didn't seem to take much damage from the Daikatana, but fell ridiculously easily to normal weapons - I'm not sure if that was supposed to be some kind of meta comment, but it seemed a bit lame to me. Secondly, the sidekicks are incredibly irritating. Their AI just couldn't cut it. While the patch improved the amount of time I got stuck in scenery, it didn't do much for the sidekicks, who were constantly getting lost or stuck miles back in the level, and I had to go back and nudge them along to get things moving again. (To be fair to the patch, it does apparently improve sidekick AI massively, but I never saw them without it.) It would have been much better if the game had just acknowledged that they sometimes got stuck, and either allow you to progress in levels without them, or just have a rubber banding algorithm that teleported them closer to you when they got too far away. Also, because of the aforementioned soul-drinking thing with the Daikatana, I didn't actually want the sidekicks coming along and stealing my kills, so I'd often leave them if they got stuck at the beginning of a level, go ahead and clear out as much of the level as possible on my own, and only go back and nudge them free when I couldn't proceed any further. So, not a bad game - once the patch is installed - and I enjoyed most of my time with it. Not sure I'd particularly recommend it, though.

Next up on the randometer is...Motor City! Looks like a hard-core German sim about running a car factory. Can't see this one lasting a long time, but I'll give it a go.

On the series front, I'm still slowly making my way through Fallout 3. The constant crashing is still sapping my enthusiasm somewhat, but I'm getting there. The game itself is good.
Posted by Binkbenc at 14:49